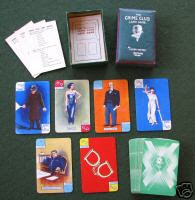 Crime fiction offers much more than just a whodunit game between the writer and the reader, but the game element does appeal to me, and it was an important element in the Golden Age mystery.

The Christmas break is probably the best time of year for families to indulge the game-playing instinct to exhaustion. ‘Cluedo’ must be the best known detective game – it gave rise to a film, Clue, as well as a television show filmed at Arley Hall, a few miles from Lymm. We’ve recently watched Clue, which was written and directed by Jonathan Lynn, co-writer of one of the best of all British sit-coms, ‘Yes, Minister’. It’s entertaining holiday fare, with no fewer than three different endings (a fourth was apparently discarded – you can have too much of a good thing.)

There are innumerable other mystery board games and card games. Over the years, I’ve picked up quite a few. For the first time in years, we’ve brought out ‘221b Baker Street’ – possibly my favourite, because of the very entertaining and varied mystery puzzles to be solved – and ‘Scotland Yard’, quite a neat chase game. We've also tried out ‘Inspector Morse’, which is a bit like a simpler version of ‘221b’.

Some of the older games are interesting curiosities. In the past, as now, they were often conceived as some form of commercial spin-off – for example, there were Collins Crime Club and Sexton Blake card games, as well as a Crime Club party game, Photo Crime. In the last twenty years or so, jigsaw puzzles with a mystery element (again sometimes linked to ‘Cluedo’ or Inspector Morse) have enjoyed a vogue.

And at the risk of getting stuck in a groove, I’ve been reading a lively thriller called A Game of Murder. More about this shortly.

I am playing the pc game made of 'Then there were none'.
It is the third adventure game made of an Agatha Christie book, and I like them very much.
They have tried to make them surprising by adding new elements.
And in the first, Murder in the Oriënt Express, the voice of Poirot is done by David Suchet, which gives it a very homely feeling.

Liesbeth, that's interesting. I should have mentioned pc games. I didn't, because I've never played any. But your post makes me think that one of these days, I should seek one or two of them out. In time for next Christmas, anyway...

Well, I am not a very young person, or a geek. I have always loved Agatha Christie, and dreaded the fact they were adapting her books into pc adventure games. But I played the first two and enjoyed them highly and it makes me always wonder what she herself would have thought.
you can check them out here (and no, I don't have a financial interest ;-)
http://www.agathachristiegame.com/

Thanks, Liesbeth, I'll check it out. The range of spin-offs from crime stories never cease to fascinate me. What would Wilkie Collins have made of having one of his masterpieces turned into an Andrew Lloyd Webber musical, for instance? (Apart from a lot of money, that is...)