A change of scene 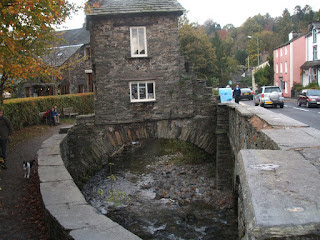 One of the interesting things about writing two different series, set respectively in Liverpool and the Lakes, is the need to change approach when shifting from one to another. After a long break, I really enjoyed getting back into the city scene with which I’m very familiar (because I’ve worked there since 1980) in Liverpool. So creating the environment for Waterloo Sunset was pretty straightforward – even though I still needed to do plenty of research, which included exploring the building of the block opposite my own office and taking the opportunity provided by a fire drill one morning of exploring a little oasis of greenery tucked just off a six-lane highway and which I'd not paid much attention to over the years.

Now I’m back writing about the Lake District and although I know parts of the area (not all of it, by any means) very well, it’s a different matter creating a strong picture of a place that you don’t see as regularly. All the more so because I don’t have a particularly strong visual memory. This means there is a need for regular return visits (which prompts family members to urge me to write a Lakes book set in the height of summer again, rather than another with a winter backdrop – well, maybe next time!) For my own part, I need no excuse to escape to the Lakes whenever the opportunity arises. Even the areas that attract the tourists still have plenty of appeal to me and, after The Arsenic Labyrinth was set in Coniston, the new novel is taking me to Ambleside, where Hannah and Marc have moved.

On my first visit of the year to Ambleside, I had the pleasure of meeting Steve at Fred Holdsworth’s bookshop in the centre of the town. I’m a huge admirer of the work that independent booksellers do in a far from easy commercial climate and this is a small but very welcoming and well-stocked shop that has flourished for many years, and will, I hope, continue to flourish far into the future.

Because the new book is set at around this time of year, it’s all the more important to remind myself of how places look and feel in the depths of winter. The contrast between a bright summer day on the fells and their brooding atmosphere in winter is quite something. As my career has developed, I think I’ve become both a more descriptive writer and one who deals with characters’ relationships in increasing depth. This evolution is something I’m happy with, though I keep reminding myself that story is paramount. And in a mystery novel, I think that means that a strong plot and a reasonable amount of incident remain important.

How lovely to see this photo - one of my very earliest non-seaside holiday memories is marvelling at this 'little house on the bridge' as a child and drawing endless pictures of it for weeks afterwards!

What a fantastic job in life to get to write about the Lake District. If you ever need accommodation up here please do try our Lake District Holiday Cottages. We pride ourselves in being quiet, pet friendly but also close enough to the center of the Lakes as well.

Am currently reading The Coffin Trail and enjoying it very much. I have several photos of my two daughters when they were very small, outside this little house. I was also sent a pic by my elder daughter (now 30) when she revisited recently and was delighted to see a scene of her childhood. She got quite tearful! I feel a visit to the Lake District must be on my list soon, one of the most beautiful places in England