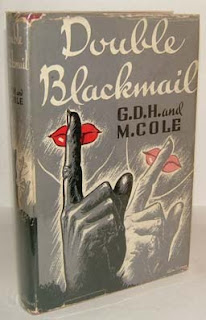 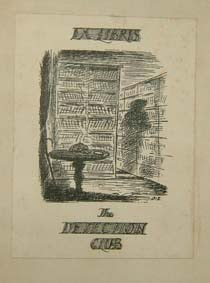 The blurb of the American edition of the Golden Age mystery Double Blackmail, by G.D.H. and Margaret Cole, is rather enticing: ‘”Double Blackmail” only in part describes the double-ness of this detective mystery. There are, of course, two cases of blackmail. But there are likewise two murders; two bigamies; two detectives; the two Coles for authors; and twins….’

Two bigamies – blimey, you don’t find that in many murder mysteries nowadays! The Coles were a husband and wife team who were prolific producers in the Golden Age. They were prominent socialists, and G.D.H. (like Robert Barnard, many years later) was a Balliol man who rose to prominence in the Fabian Society. Margaret was the sister of Raymond Postgate, who wrote that brilliant crime novel Verdict of Twelve (and who also devised The Good Food Guide), and aunt to Oliver Postgate, creator of Bagpuss.

The Coles wrote books of the kind disparagingly described as ‘humdrums’, and their regular sleuth Superintendent Wilson was notoriously characterless, but I’m led to believe from comments on the excellent Golden Age Detection discussion group that this novel, which features Wilson, is one of their better efforts.

I have not yet read the book, having only just bought it, as a treat for myself after a few fun-free weeks. The appeal of this particular volume was not just the mystery (though I do find that idea of a story about double bigamy weirdly intriguing) but the fact that this book was presented to the Detection Club, and signed by, Margaret Cole herself. So it’s a small piece of crime fiction heritage, and I’m very happy to have it on my bookshelf.

What a great cover and premise.

Sounds like a cool book. I like these old finds. Sometimes going back to the past gives us wonderful treasures in mysteries.

Martin - Oh, I hope you richly enjoy this!! I'm eager to read what you think of the book. It sounds wonderful.

I hope it's double the pleasure when you read it. I'm looking forward to reading your thoughts after you've read it.

I am quite sure I read some of their books although I couldn't name one.

Sounds really edgy for back then!

Let us know what you think, after you read it.

Love the cover! They don't make them like that anymore.

Bigamy and blackmail are among these motives that are less convincing today. Interestingly, people go on killing their spouses even though it is quite easy to get a divorce. But then, what can a crime writer do but kill?

Double bigamy does not sound humdrum. It'll be interesting to see your after-reading thoughts on it.

Martin, I hope you like this one, I think it's pretty good. Titles like this by the Coles are not "humdrum" really, they're more farcical. I've always thought the Coles were rather misclassified.

That's a beautiful book jacket, I'd never seen that. I did pick up several of those books with the Detection Club plate however. If I recollect correctly, the book plate design was by Edward Ardizzone, the famous children's book illustrator (including the Nurse Matilda books of his cousin Chriatianna Brand).

Margaret, by the way, was a great devotee of the Detection Club library (she liked reading mysteries for free!).

It's great to see you promoting these old authors, part of the great English crime fiction heritage.

Thanks for all these comments. You have encouraged me to get reading Double Blackmail before long!
Curt, I am sure you must be thrilled to have those other Detection Club books. They are a fascinating slice of history.