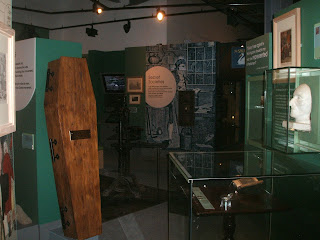 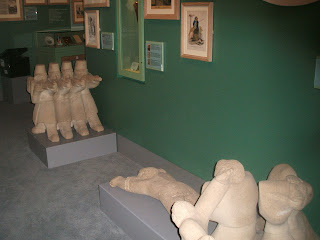 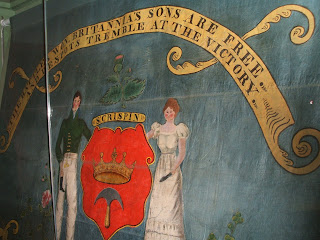 I had the pleasure of being invited to the opening last night of the revamped People’s History Museum in Manchester. I’m a big fan of museums generally, and I much enjoyed inventing the Museum of Myth and Legend for The Arsenic Labyrinth, and researching in places like the fascinating Bagshaw Museum in West Yorkshire. Lottery money has helped to ensure that Manchester’s redeveloped museum looks very impressive, while the displays are imaginatively presented.

The opening was very well attended, and there was a real buzz about the place. My host, a trustee of the Museum, and a pal for the best part of thirty years, is a doyen of the Labour party, and I gather the party’s archives are to be kept in the Museum. He is one of many people who have worked hard on the project, and I'm sure they were all pleased with last night's event.I can’t imagine ever wanting to join a political party, and I don’t have much time for our present government, but I do think that the history of the labour movement is fascinating. Above all there are many rather moving stories of the struggles of those who believed in a cause, and who did not allow their idealism to be tainted by the egotism and selfishness that is the hallmark of the expenses scandal era. One does wonder what stalwarts of the past would make of the way in which politics has developed in recent years.

Political thrillers often seem unsatisfactory to me, especially if they are written from a prejudiced viewpoint, whether of right or left, but there are some interesting mysteries with a political slant. One that I acquired a while back, and look forward to reading,is The Division Bell Mystery (1932) by Ellen Wilkinson, a left wing MP known as ‘Red Ellen’; her circle included G.D.H. Cole, whose book Double Blackmail I mentioned recently..

Wilkinson’s life story is remarkable, though it had a sad and premature end. A renowned class warrior, who herself came from Manchester, she became Minister for Education in 1945. Two years later, she took an overdose, for reasons that remain mysterious; some say it was because she was disappointed by political failure, on other accounts she was distraught because of an unsatisfactory secret affair with an ambitious fellow minister. Her whodunit may not be a masterpiece – it is perhaps significant that she never wrote another – but it will be interesting, quite apart from the story-line, to see how a fascinating woman portrayed the political dynamics of her time.

Martin - Thanks for sharing this beautiful museum with us. I can see why you enjoyed it. It's really impressive-looking.

It looks like a wonderful place, Martin. Glad the opening night went so well.

Those pictures are wonderful and the museum looks like a fascinating place to visit. I'm not a fan of political thrillers either but there are good ones out there.

A good museum is a great way of getting to know a city or an area!

I just received The Serpent Pool as a belated birthday present. I am really looking forward to reading it, but I will let it sit on the shelf until I have time to enjoy it properly.