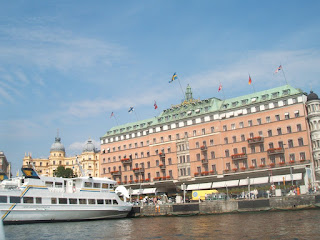 Nordic Noir was an interesting BBC 4 documentary about Scandinavian crime fiction. As regular readers will know, I have quite a long-standing enthusiasm for a number of Scandinavian crime writers – as well as for their countries, which I’ve visited occasionally, and this was a worthwhile assessment with the added bonus of shots of fascinating towns, cities and landscapes (the photo is Stockholm, a city I really liked on my first visit this year.)

Inevitably, the main focus was on Stieg Larsson, but there was also discussion of a range of other writers, including Karin Fossum, Jo Nesbo, Henning Mankell, Sjowall and Wahloo – and Arnaldur Indridason, whose native Iceland is one country I haven’t visited and which is high on my to-be-travelled-to list.

And there was mention, too, of Miss Smilla’s Feeling for Snow, by Peter Hoeg, which some might call a ‘literary’ crime novel, and certainly a book which is memorable, especially perhaps for its early scenes. No mention,though, of Gunnar Staalesen, whom I discussed here a little while back.

The talking heads included the crime fiction commentator Barry Forshaw, and novelists Val McDermid and Hakan Nesser. The witty and amiable Nesser made the point that there are fashions in crime fiction as in other areas of life, and that one of these days, attention will shift elsewhere. Another interesting comment was that younger writers may be more interested in global issues than in exploring localised societies – I’m not sure whether I agree with this broad generalisation, but it certainly got me thinking.

Martin - Sounds like an interesting documentary. We didn't get it here, but hopefully one of our local affiliates will get the rights to it.

I, too, wondered who Hakan N meant by the younger writers, as he gave no examples, so deduced that they must be writers who aren't (yet) translated.

I have read many Nordic noir novels not mentioned in the programme, several of them seem to be young, eg Karin Altvegen, Liza Marklund, Frode Gryttan, K O Dahl, Yrsa Sigurdardottir, Helene Tursten, Ake Edwardsen, Kjell Eriksson and others -- and those books do all tend to feature social/political/psychological issues....along lines of examples given in the programme. So what HN meant is, indeed, intriguing!

Best wishes for a merry Christmas and a happy new year.
Maxine.

Great minds, and all that. My blog post this morning is also about the programme, but as Seana points out, I'm more disgruntled. But it's good to know that you are 'gruntled' and liked Nordic Noir. Well, so did I, but I had to grumble.
And I forgot Nesser's comment.

Thanks for this -- I had not noticed it was on and have now found it on iplayer. I love nordic noir so this is just the thing for me!

I tried to watch that but we can't get BBC4 in Poland.

I haven't read any Nordic Noir.

Where should I start?

I echo Paul's comment 'where to begin', having not read any Nordic Noir ... but I love the name!

And would you believe ... I have stayed in that hotel in Stockholm ... many years ago.

Wishing You a Happy Christmas!

I think they should send that documentary our way, but at least I have seen three interesting blog posts about it now.

And with regard to Paul´s comment, the writers don´t seem particularly ´noir´ to me, but they probably thought it sounded good.

Thanks for these comments.
Petrona - yes, it is intriguing. Hope to see you at Crimefest or elsewhere in 2011.
Paul - I rather like Hakan Nesser. Karin Altvegen's Missing is also good.
Aguja - amazing coincidence!