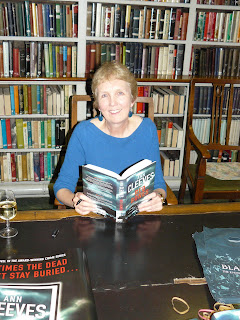 I blogged a couple of years back about a Victorian murder mystery event I held at Newcastle's marvellous Lit and Phil - to which I was introduced by Ann Cleeves, who came along that day for lunch with me and my family as well as to the show. So I was naturally very glad to include a guest blog from Ann about the Lit and Phil. Here it is.

I first visited the Lit and Phil library in Newcastle to meet a writer friend on our way to the pub. The idea of a private subscription library had never really appealed to me: libraries should be available to everyone, not just those who can afford membership. I’d imagined it would be full of elderly academics or wealthy eccentrics. But my friend writes horror, crime and fantasy, and while he might be considered eccentric like most writers he isn’t wealthy. On that first visit I became seduced by the place. I’ve been a member ever since.

The building was completed in 1825 and is certainly impressive. There are busts and oil paintings, a first edition King James Bible in a case, glass domes, a spiral staircase and a balcony. These might be intimidating but the welcome from the staff, the tea bar and the buzz of conversation around the big oval table made me feel immediately that I was among friends. This is a place of music and comedy as well as serious discussion. One of the most popular events is the telling of new ghost stories after Christmas.

The books on the shelves made me feel at home too. Of course there are reference texts and literary works, but the bulk of the titles on the shelves in the main lending library are detective novels! Some books are long out of print and would have been weeded from a public library years ago. There are rows of yellow Gollancz jackets, Collins Crime Club titles and stories that I remember from library visits of my childhood. And next to them there are the best contemporary crime writers. This is a serious place where genre fiction is taken seriously.

The Literary and Philosophical Society was founded as a ‘conversation club’ and from the beginning it had an inquisitive and liberal nature. Women members were admitted almost from the start. George Stephenson demonstrated his miners’ safety lamp there and the society’s lecture room was the first public room to be lit by electricity during a lecture by Sir Joseph Swan. John James Audubon, the famous American ornithologist, visited the library and was made an honorary member. One of my favourite detective novelists, Dorothy Sayers, was a visiting speaker. This is still a place where poets, scientists, working people and historians meet, talk and listen. It’s still a conversation club.

Later in the week I’ll be launching my new Vera Stanhope book SILENT VOICES there. A folk band from rural Northumberland will set the scene, there’ll be wine and readings and a sneak preview of the ITV adaptation. Other February events included a lecture on Garibaldi, a film screening from the Northern Region Film and TV Archive, an illustrated lecture called ‘The Vampire Rabbit and its Kin’ (wish I’d been at that one!), a small press poetry launch, an evening of jazz and a conversation between Val McDermid and Chaz Brenchley.

And also the launch of an appeal. Because although this institution is lively and thriving, the buildings are crumbling and we need to make its treasures more accessible.

So here’s the pitch: if you live in the north east and you’re not a Lit and Phil member, do join. Visit us, borrow our detective novels and come to our events. We need your support. If you live further away and work or family brings you to Newcastle call in to see us. We’re two minutes from the Central Station and the coffee is cheaper and better than you’ll find there. And if you think that this wonderful place should survive, but membership isn’t for you, then consider becoming a friend of the library. You can find details on the website: www.litandphil.org.uk. I look forward to seeing you there.'

Martin - Thanks for hosting Ann.

Ann - Thank you so much for your post. The Lit and Phil seems like a wonderful group. I wish I were close enough geographically to be involved, but if I do travel to Newcastle again, I'll certainly pay a visit. Much success with your new Vera Stanhope novel!

How interesting. I'm about an hour and half away from Newcastle, so I'll definitely visit next time I'm there. I didn't know anything about it - thanks for the info.

I've just checked their website and see that Ann's book launch is today - I wish I could go - but I can't today!

Oh, it sounds a wonderful place! Alas, I live almost as far away as is possible without falling out of England...

I so enjoyed meeting Ann at the Reading Crime Fest last year; I love the Shetland Quartet and am now a big fan of Vera too. Unusually, I'm looking forward to the TV adaptations because I know Ann is pleased with them.

Thank you for giving her space, Martin!

I do live in the North, but sadly it is not the right North - otherwise I´d absolutely love to join you!