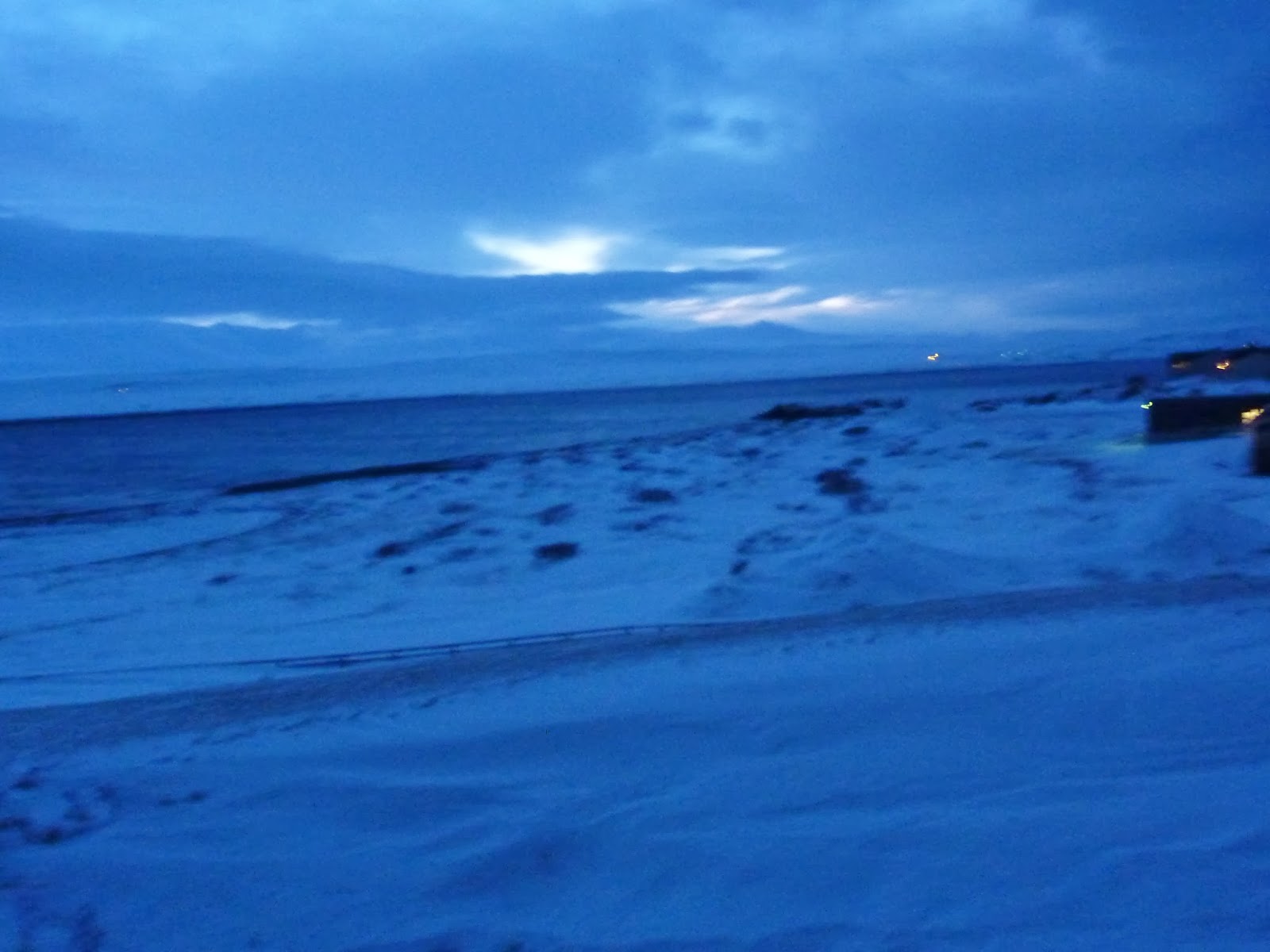 Although the theme of last week's boat trip up the coast of north Norway was "hunting the lights", the first thing for me to say is that my camera and photographic skills proved not to be up to the challenge of capturing the Northern Lights when, finally, I did see them. Though there were plenty of moments during the trip when the quality of light over the coastline before darkness fell was absolutely mesmerising. The above shot was taken as the sun went down over Vardo. Landing there gave an opportunity to fellow passengers more intrepid than me to bathe in the Arctic Ocean - at least for about thirty seconds... 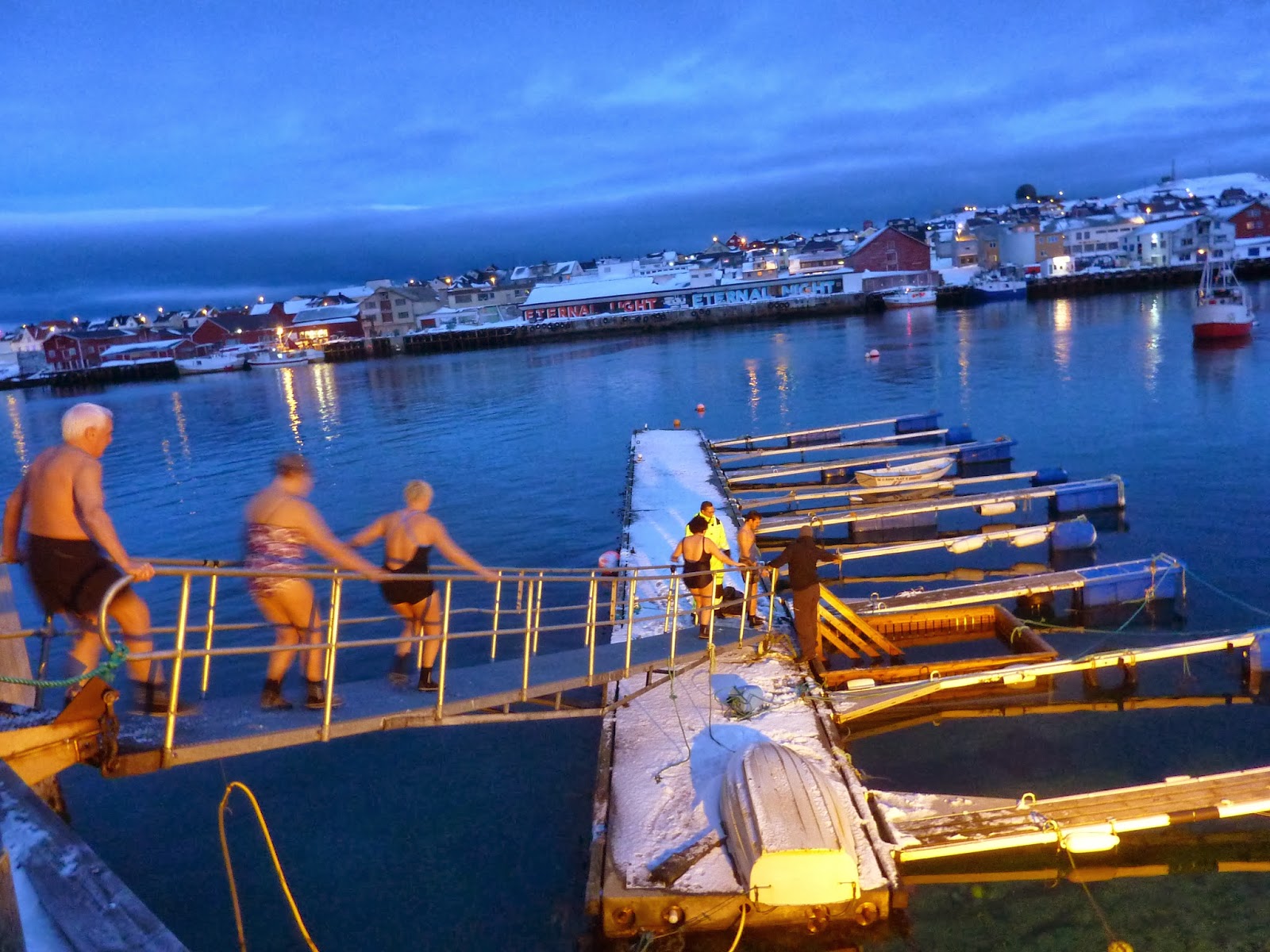 Well, it takes all sorts, I suppose! During that brief stop in Vardo, (safely encased in many layers of warm clothing!) I visited the most northerly fortress in the world. In the twilight it had an especially eerie charm. 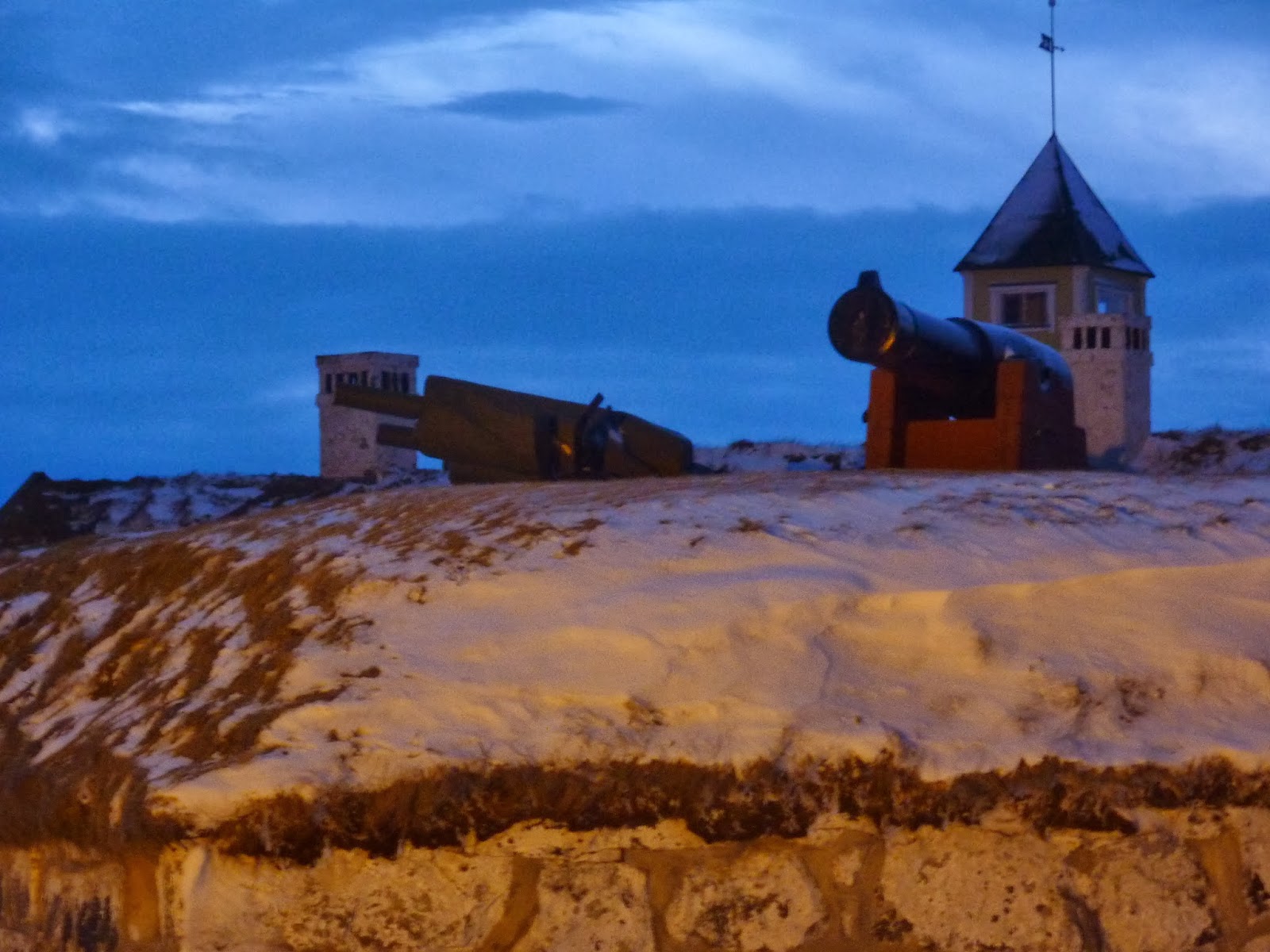 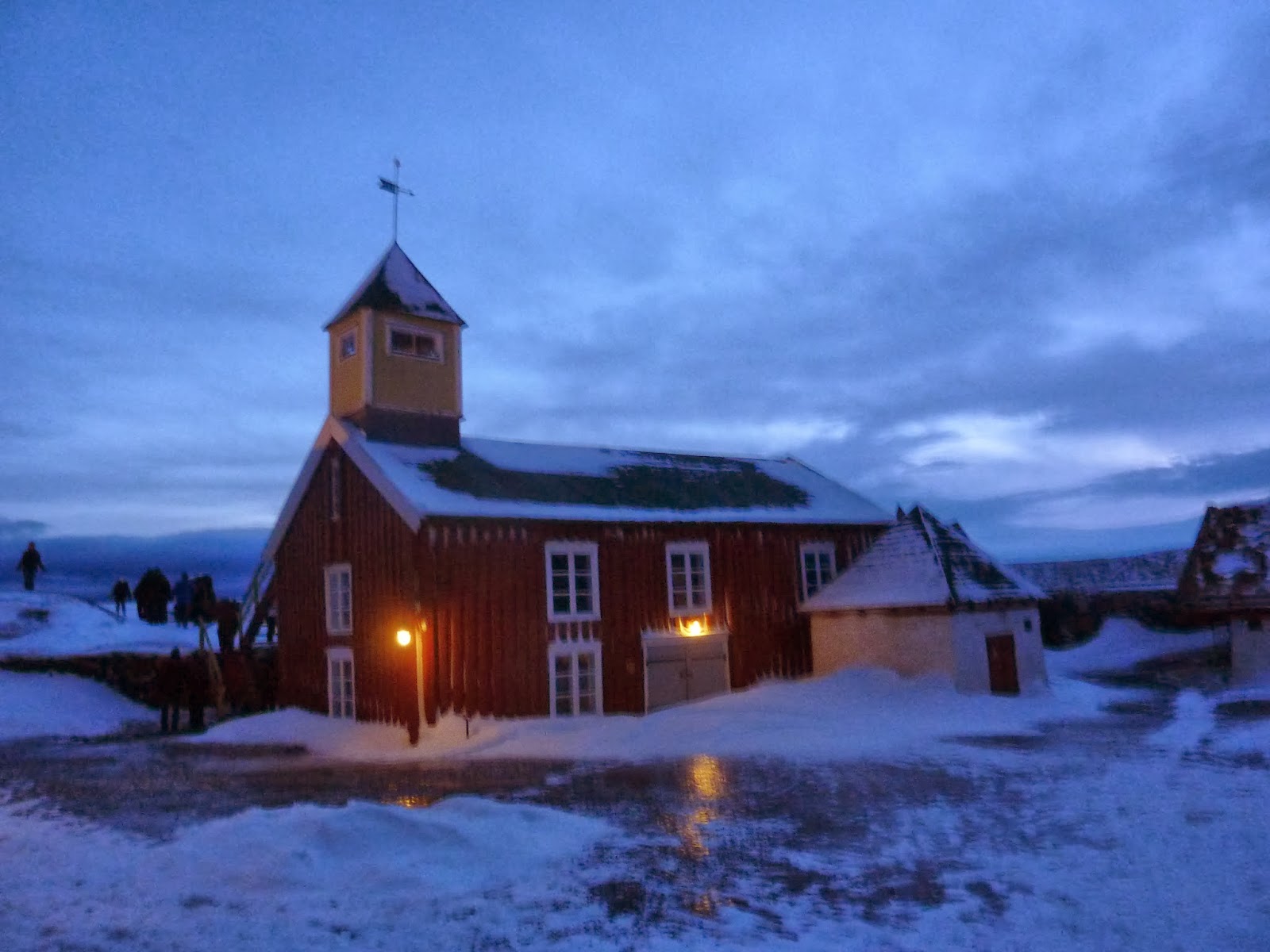 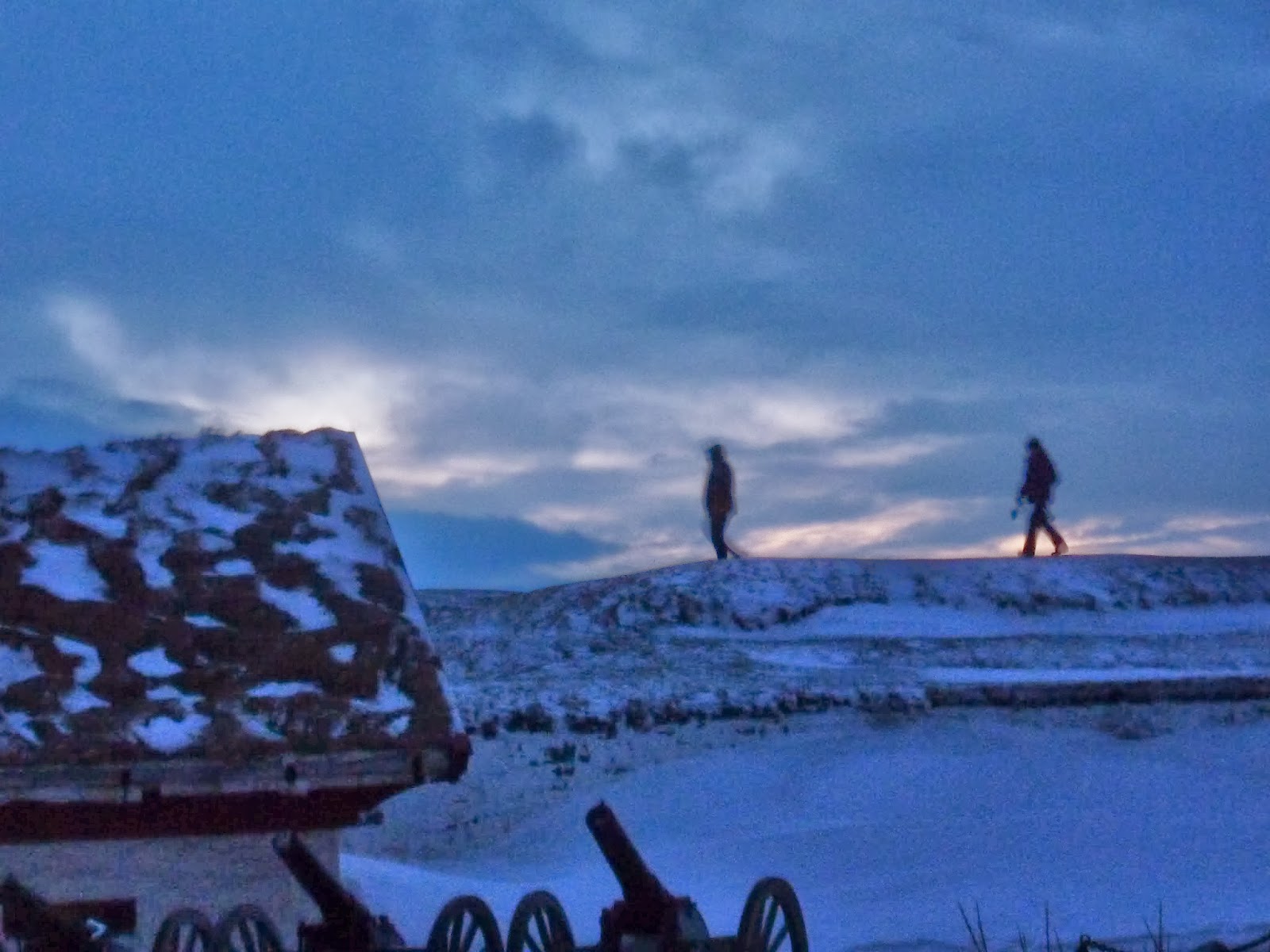 Other ports of call included Hammerfest, one of many small towns in Norway which seems to be benefiting from the exploitation of the country's massive natural resources. I was interested in the lifestyle of people who come to this very cold region from warmer countries - some clearly love it, and there is plenty to love, I can see that, even though personally I'd find the total absence of sunlight between late November and late January very hard to take. 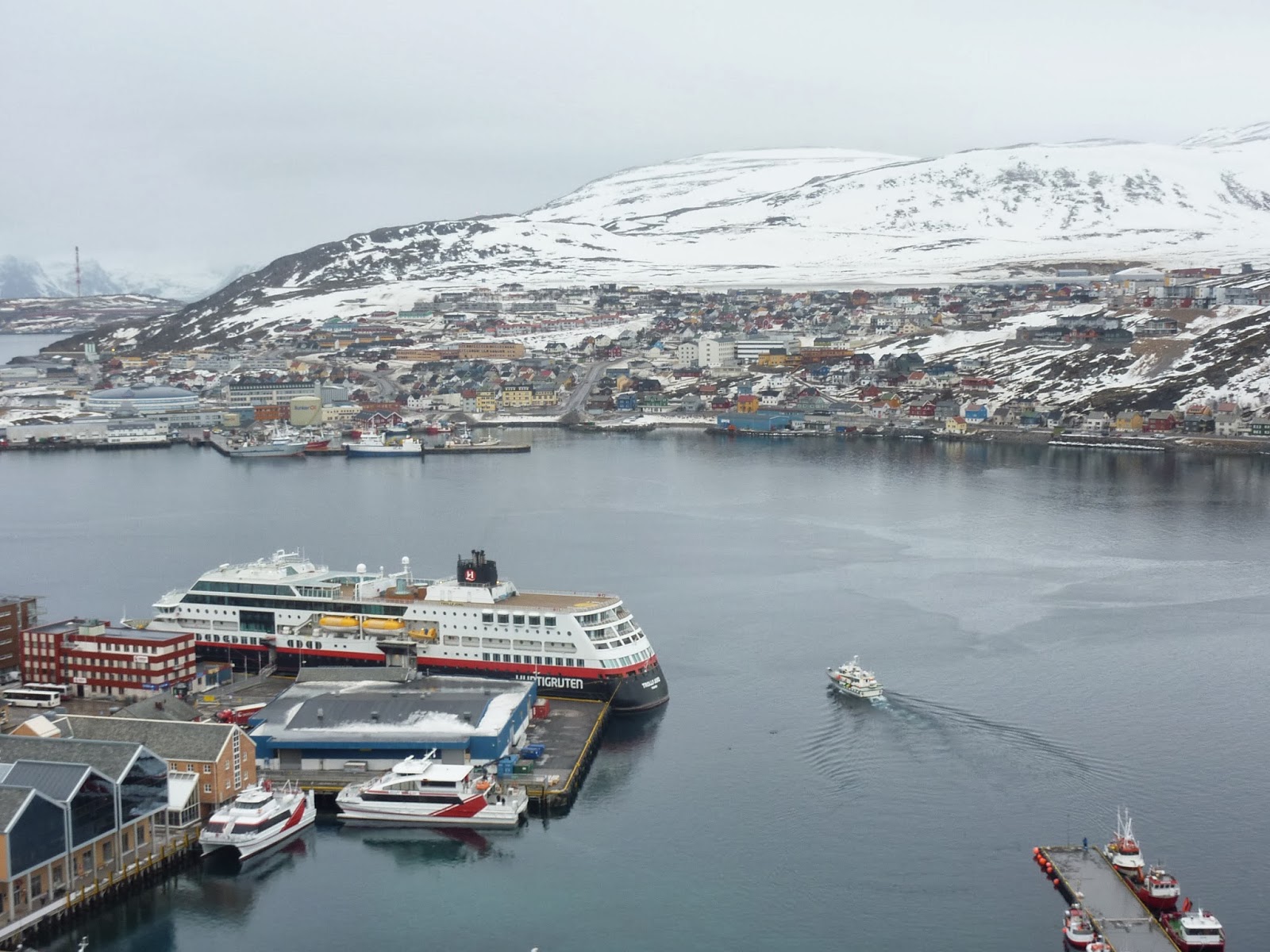 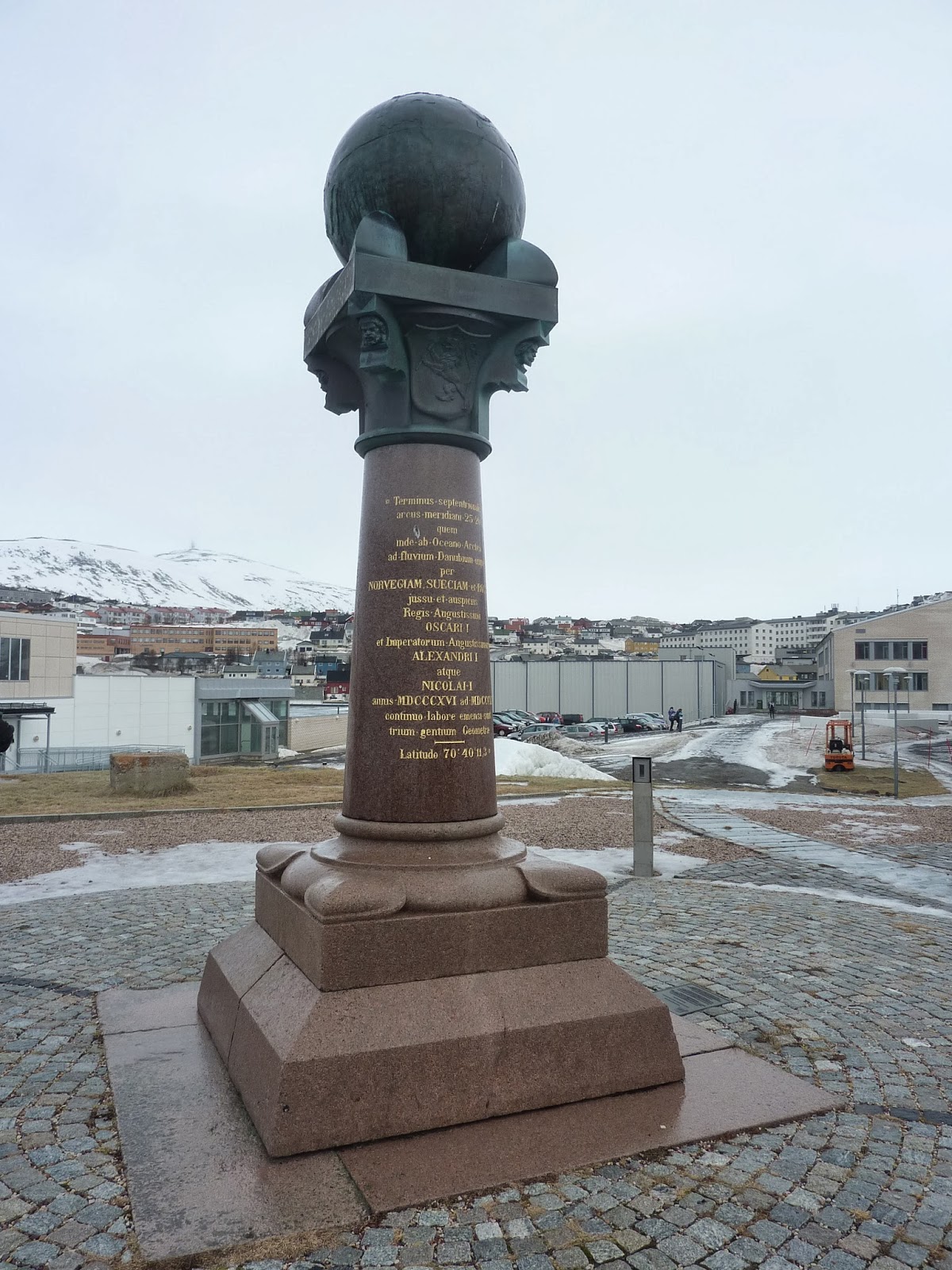 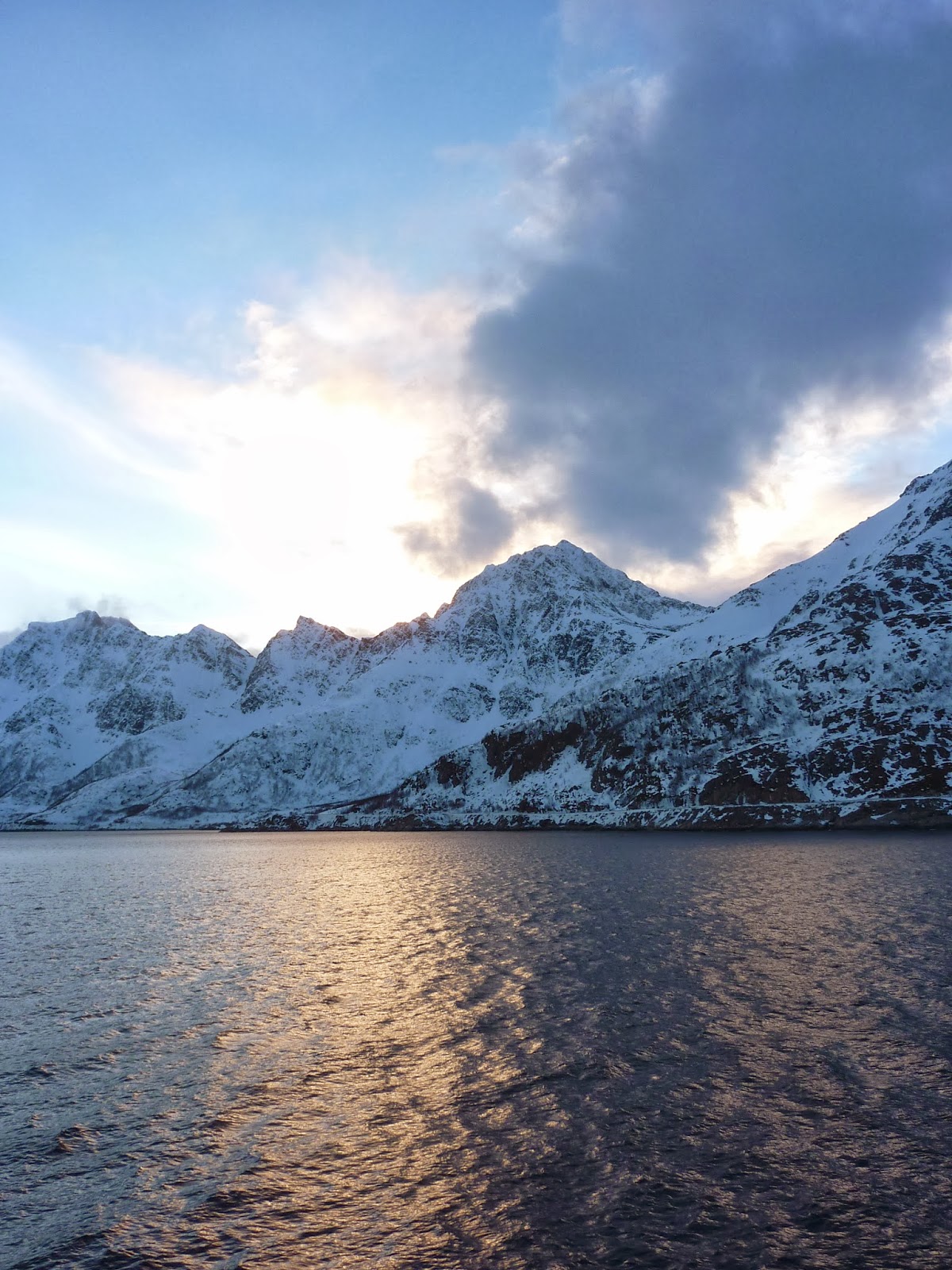 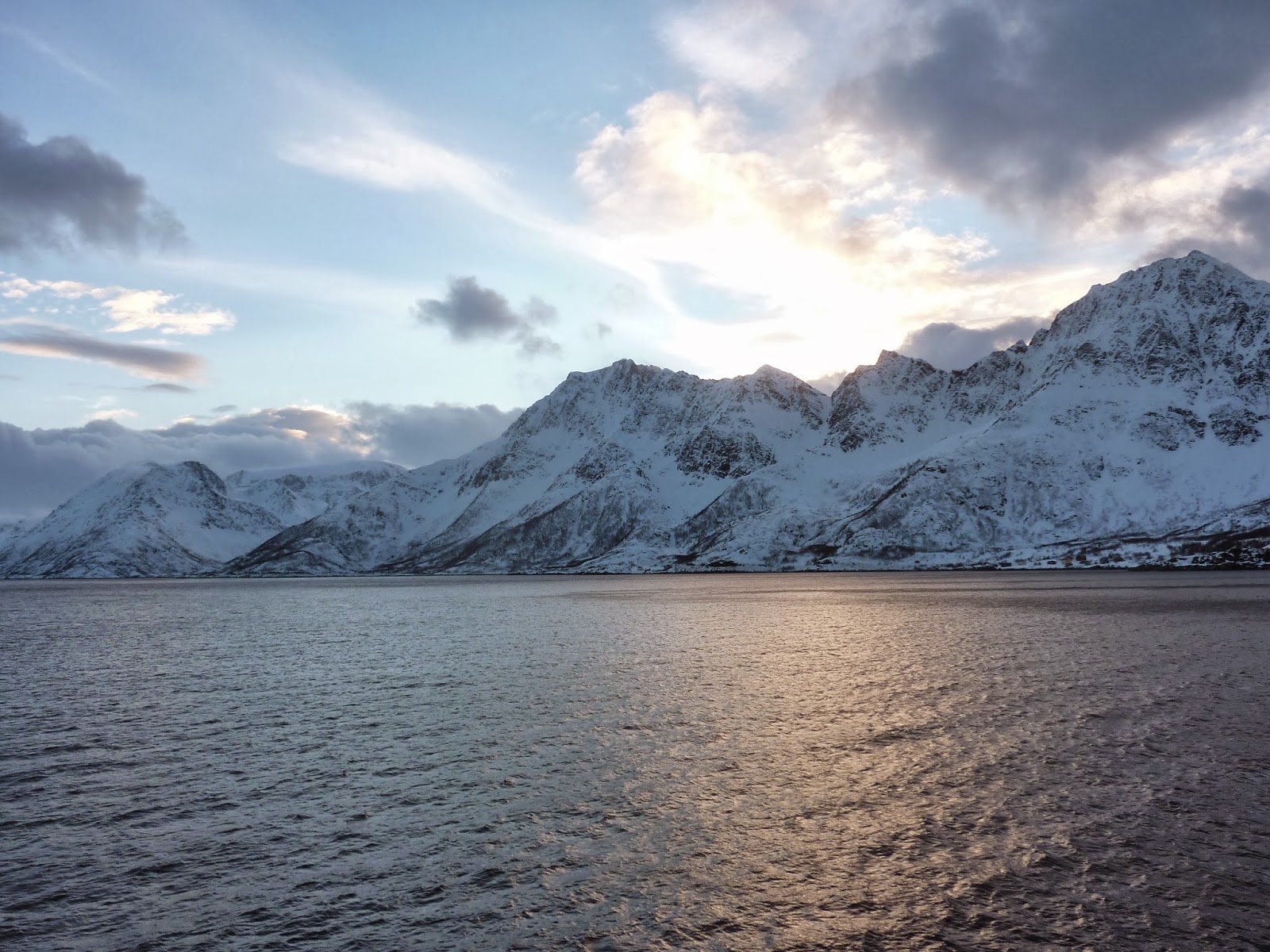 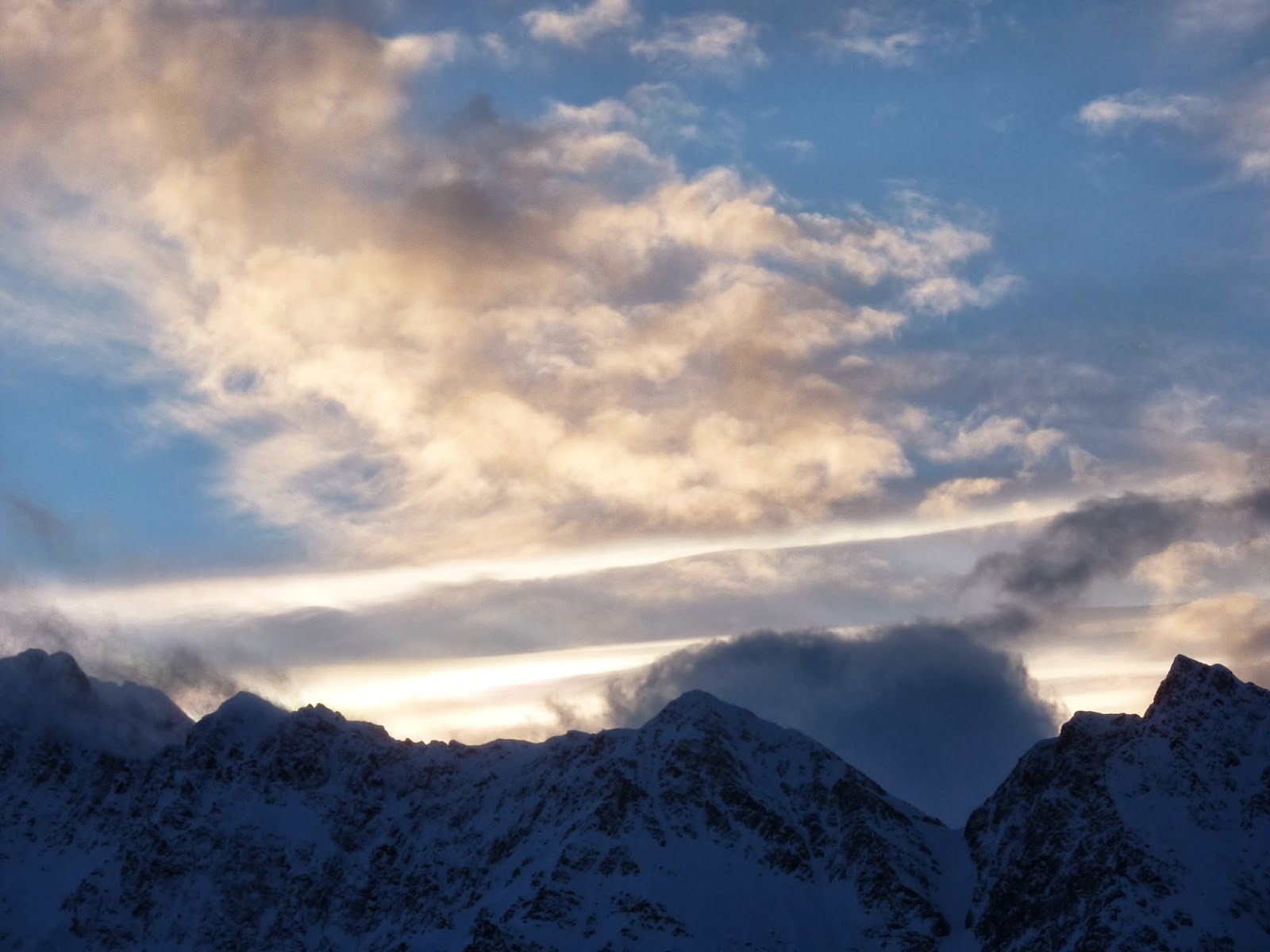 The quality of the light on snowy mountains and sea just below Hammerfest was magical - my photos really don't do it justice. As for the Northern Lights, there were two cloudy and blank nights before the first message came that they were visible. I'd been surprised to learn that many Norwegians, even, have never seen with the naked eye the green lights that are often portrayed in dramatic photographs, and I didn't either, though a charming fellow traveller - a Turkish brain surgeon, yes, it's a cosmopolitan world up there - has captured them in a photograph as stunning as any you see in the books and I[m planning to retweet it..

My own first sighting of the Northern Lights was truly memorable - out on deck in an Arctic gale so powerful it was almost impossible to stand - but there were the legendary lights, a pinkish red glow. Later that evening, there were two further displays - more elaborate and longer-lasting this time, strange shapes in the sky of a ghostly white hue. All in all, it was a remarkable experience. It was only a short break, but I've never had a holiday like this one. I much prefer to be warm rather than cold but I'm really very glad I returned to this fantastic country.

And there's one bonus of life in that part of the world, when it gets dark early. You have plenty of time to read, and I rattled through a number of enjoyable books, by authors as diverse as John Buxton Hilton, Joyce Porter, Winston Graham, and Margaret Millar. I'll be featuring all of them in this blog before long.

Martin - Lucky you to have seen the Northern Lights - it must have been fantastic. And you've shared some lovely 'photos too, for which thanks. What a trip you've had!

Enchanting photos and commentary. You made me "homesick" for when I was in Iceland which is so similar all that you've described and shown.

Margot, RT, thank you. Iceland is definitely a country I'd like to visit, too.

Before I arrived in Iceland for a year and a half of NATO duty way back in the late 70s, people told me I really needed to visit in autumn when all the leaves on the trees were changing colors. Of course, they neglected to tell me that Iceland then had only four or five of those kinds of trees. In any case, unless you really like howling winter storms and long, long nights, you should avoid Iceland in the winter. Summer is wonderful, especially when you get to see Icelanders sunbathing in 50 degree (F) weather. Seriously, it is starkly beautiful, and it deserves to be one of the "must see" locales in all the world. I preferred it to Africa and Asia. Only Scotland (and the U.S.) are higher on my list than Iceland.

RT - that's a great comment, quite fascinating - thank you! I am definitely aiming to go there now...