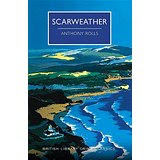 The British Library has published its catalogue of forthcoming publications for the first six months of next year, and it's full of treats. Several of them, I need hardly add, are to be found in the Crime Classics series! As usual, the BL has come up with some lovely covers. It's unusual for paperbacks to attract collectors, but I know that a good many people are collecting the series, not only because they enjoy classic mysteries, but also because these books are lovely to look at.

I'm delighted that Verdict of Twelve, by Raymond Postgate, is making a reappearance after an unaccountably long absence from the bookshops. Julian Symons and Michael Gilbert were among its admirers, and I think it's a terrific novel. There's also a novel by Lois Austen-Leigh, The Incredible Crime, which I look forward to reading. It was discovered by Kirsteen Saxton, who has written the intro.

Two books by Anthony Rolls (a pen-name for C.E.Vulliamy) make an appearance. First comes Scarweather, then Family Matters. Rolls, like Postgate, was an ironic stylist whose work shows the influence of Anthony Berkeley (in his Francis Iles incarnation) yet is truly distinctive. I'm not aware of any UK editions of these books since their first publication in the early Thirties.

And then there are two anthologies of mine. The first is Miraculous Murders, a collection of locked room mysteries and impossible crimes. The second is Continental Crimes, which gathers mysteries set in continental Europe. There are several little-known and fascinating stories in each book, and I'm really looking forward to their appearance.
Posted by Martin Edwards

I hope they also reprint the 'The Vicar's Experiments'. I was able to get a copy through interlibrary loan a few years ago and thought it was great, but was never able to locate any other of his books here in the US. So glad I'll finally be able to read some more Vulliamy!

Thanks, Ted. That is an entertaining book, I agree, and I hope that Vulliamy will be the latest author to benefit from a sprinkle of the BL's stardust! Hope you enjoy the two that are imminent.

I am a sucker for a locked room mystery, so I must have that one!

I love the covers and am certainly collecting them. I do hope they publish more John Bude novels.

Thanks, Christine. I'm really pleased with the mix of stories.

Thanks, Pauline. Your wish will, I am sure, come true!

How exciting about the Anthony Rolls books! FAMILY MATTERS is top notch, IMO. I'll have to get to SCARWEATHER soon, the one Rolls book on my shelves I still have yet to read. I never found a copy of LOBELIA GROVE and would love to see that one reprinted since 1. it's so scarce as are all his books, and 2. Curt Evans said good things about that one.

Hey Martin, thanks for the heads-up and I'm looking forward to Postgate's novel; Rolls sounds like he would be interesting too. Could I ask about 'Miraculous Murders' and what it might add to existing collections? So that I don't end up duplicating what I have on my Kindle...

Thanks, John. There are interesting elements in all the CEV books that I've read, and the build-up in Family Matters is indeed fantastic. Yes, Lobelia Grove is another enjoyably different story.

Jonathan, send me an email and I'm let you know the contents. I don't know about Kindle Unlimited, but will enquire.

Hi Martin, is your email anywhere on your website? Can't seem to find it...

It is there, but no matter - martinedwards10@btconnect.com

I've been slowly reading my way through these books, as my local library acquires them. Been very impressed with a couple, though one or two have been clunkers. Still, I LOVE the gorgeous covers. A job well done. They're published here by Poison Pen Press in conjunction, I suppose, with the British Library.

Three of my favorites so far are THE HOG'S BACK MYSTERY by Freeman Wills Crofts. SECRET OF HIGH ELDERSHAM by Miles Burton and THE CORNISH COAST MURDER by John Bude. But I will keep an eye out for the authors you mentioned in this post, too.