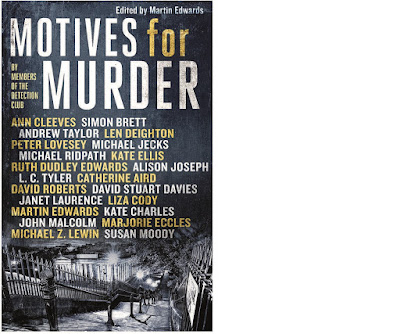 On Thursday evening I had the pleasure of presiding over an unforgettable evening at the Dorchester Hotel. It was the Detection Club's November dinner, which proved to be a sell-out, with a speech from distinguished former crime fiction editor Hilary Hale and the induction of two new members - James Runcie and Mick Herron. Guests included visitors from the US and members of the family of Ronald Knox, one of the Club's founders.

We also celebrated the recent 80th birthday of that wonderful writer Peter Lovesey, who has been a member of the Club for over 40 years. I admired Peter's books long before I met him, more than a quarter of a century ago, and when I suggested to Club members that we celebrate him in a practical way by producing a book in his honour, the response was overwhelmingly positive. And the result has just been published - a book called Motives for Murder.

The UK edition, published by Sphere (front cover above), was presented to Peter by David Shelley, once my own editor (and now J K Rowling's!) and the man who first commissioned my Lake District series. The US edition, published by Crippen and Landru (front cover below), was presented to Peter by Doug Greene whose own contribution to the genre includes a splendid biography of John Dickson Carr.

Len Deighton has written a foreword to the book, and Peter himself has supplied a fascinating afterword, detailing his memories of his early years in the Detection Club. Ann Cleeves, Len Tyler, Kate Charles, Ruth Dudley Edwards, Susan Moody, Andrew Taylor and Liza Cody are among the galaxy of talented writers who have written brand new stories for the book - while Simon Brett contributed a sonnet. An added twist is that the stories (and the sonnet) are connected to Peter's life and work in one way or another. The result is one of the most satisfying anthologies I've been concerned with, and a fitting tribute to one of life's good guys (who treated us on Thursday night to a wonderful rendition of his witty poem about autopsies...) It was a truly memorable occasion. 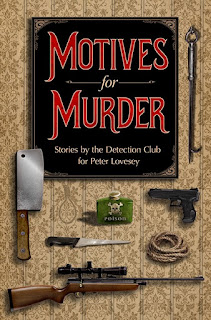 Martin, am I correct that this is the third tribute anthology produced by the Detection Club? Previous ones were 'The Man Who ... ' for Julian Symons and 'The Verdict of Us All' for HRF Keating. Am I missing any?

You are, Ted. The Club's earlier books are discussed in my intro. In fact it was Peter who edited the book in tribute to Harry Keating, a pleasing connection.

Thanks, Martin, for masterminding an evening I shall always remember and a book I shall treasure.

Just opened my copy and, WOW, what a brilliant collection ‘Motives for Murder’ is: a splendid achievement on your part as the Detection Club’s new President and a fitting tribute to the amazing Peter Lovesey following his 80th birthday.

I’ve greatly enjoyed several of his Peter Diamond series, also his Hen Mallin novel ‘The Circle’ – I’m in a couple of poetry circles myself! I shall never forget Peter’s short story collection ‘Murder On The Short List’ either; I read most of it whilst looking after young grandchildren at an activity barn in Winsford some years ago.

I regard ‘Motives for Murder’ as an early Christmas treat. Another was a visit with Maureen to the Empire Theatre in Liverpool last night to see ‘Nutcracker’ performed by the English National Ballet – fantastic!

We’re in the throes of moving to a retirement bungalow in Connah’s Quay and looking forward to our first Christmas dinner there.

Hope Lake District mystery No 8 is in preparation now.

My very best for the coming Festive Season,

Thanks very much, Paul. Motives is an anthology which I'm really pleased with. It was put together quickly, but the contributors rose to the challenge splendidly. Best wishes for a smooth move and all the best to you both for the festive season.