The Crime Classics Weekend at the British Library 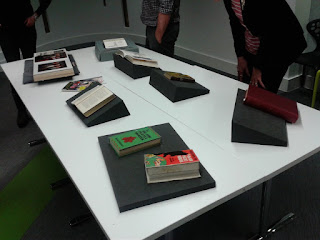 Last weekend I did something completely different - presenting a two-day course on Classic Crime at the British Library. It's yet another fascinating project that has spun out of a relationship that I find truly rewarding. The BL people are great to work with. But I must admit that when I was invited to present a substantial course I was rather daunted. A talk for an hour is one thing, this was quite another.

One option was to present the course in three weekly instalments, but that wasn't practicable for someone living in Cheshire. It was much easier to focus on a single weekend in London, even though it meant that the course would be intensive. We agreed a plan, and the course was marketed. In the back of my mind I had the comforting thought that if nobody signed up, I'd have the perfect excuse not to worry about it any more.

What actually happened was that the course sold out within a very short space of time, and there was a waiting list for cancellations. This unexpected development meant I really had to focus on how I was going to do it. Fortunately, Andrew Nelson of the Library proved extremely supportive. Already in the plan was a "show and tell" in which curator Kathryn Johnson would talk the attendees through various rare items in the BL collection. I decided to add two more special features of my own, but keep them as surprises until the course actually began.

First, I invited Seona Ford, chair of the Dorothy L Sayers Society, to talk about DLS, which she did with great enthusiasm. Second, I brought along various rare Golden Age books, many of them signed, from my own collection for another "show and tell" linked to the course content. I've done this in the past (in fact, many of my books are acquired specifically with this purpose in mind) with shorter talks in places such as Nottingham, Windermere, and Lymm. This took the concept a stage further, and a variation of it is something I have in mind for the Alibis in the Archives weekend in June. . I was gratified by the reaction of the audience, one of whom tweeted the above photo (I took a photo of Kathryn's collectors' items, but have yet to figure out how to transfer pictures from my new phone...)

As a treat for myself, I'd arranged to visit the V&A the day before the course, and among other things I had the pleasure of meeting up with an old schoolfriend, Tim Benson, whom I've only met once before since we left school at 18. Tim is now a volunteer guide, and he had the great idea of taking me round the Revolution exhibition, which was the catalyst for many reminiscences about life in the Sixties. All in all, it was a hectic weekend, but a very satisfying one. And the BL has even invited me to consider presenting a follow-up course...
Posted by Martin Edwards

Any chance of this course happening up here in the north west?

Kind of you to ask, Anon. I guess the key question would be whether any organisation wanted to host a two day course of this kind in the NW. What there will be in June is Alibis in the Archives, which will feature lots of material of interest to classic crime fans, including very likely some books from my collection. But as well as me there will be lots of interesting people talking during the two days, and two distinct murder mystery events as well.

Absolutely gutted I missed this! Looks like it was an amazing session. Would love to have seen some of your signed collection.

Thanks, Anon 2. Do think about whether you can make Alibis in the Archives.

Easiest way I've found to get a photo from your phone to a blog:

1. Email the photo to yourself.
2. Click on the photo in your email using the Copy option.
3. Paste the photo your blog.

There may be a shorter method with a single "click", but this works very quickly for me.

BTW, I've attempted to win a copy of that jigsaw puzzle mystery by Walter Eberhart on several eBay auctions over the years but I've yet to succeed. [...sigh...]

Thanks, John. I shall try it out!!! Incidentally, what would your valuation be of the Eberhardt if it's in good condition with no pieces missing? What sort of prices have been asked on eBay? I'm assuming that if it's shown up several times it can't be incredibly rare.