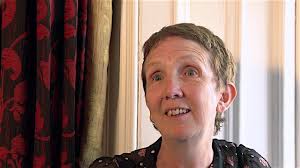 Today the Crime Writers' Association has announced that the winner of this year's CWA Diamond Dagger is Ann Cleeves. This news gives me special pleasure for two reasons. First, now that I'm the Chair of the CWA, I shall be the person to present Ann with the Dagger at the CWA Daggers awards dinner in London in late October. Second, she just happens to be (and it is a coincidence, I can assure you) one of my oldest friends in the crime writing world.

I first came across Ann's work before I met her. It was when I was battling away with my own first novel. I was interested to read her first book, not only because I'm a lifelong fan of detective stories, but also because it seemed to me to be a good idea to study the market, and what new writers of a roughly similar age to me were up to. In the same spirit, I was reading the first Peter Robinson novel at around that time. I enjoyed their books, and reviewed them. I even wrote an article discussing their evocation of rural landscape, with the title "Up the Garden Path". But the magazine I sent it to turned it down...

Later I met Ann in person - via the CWA - and we became friends. We both joined up with Murder Squad when Margaret Murphy founded it, and this led to many shared events. The first photo below, taken by Zoe Sharp, shows the original Squad line-up, including the late Stuart Pawson. The second, taken in her back garden at Whitley Bay, shows her with her husband Tim and CWA Northern Chapter doyens Peter and Margaret Lewis. I read and reviewed The Crow Trap, then apparently a stand-alone novel, and I like to think I was one of the very first to spot the potential of Vera Stanhope as a character. 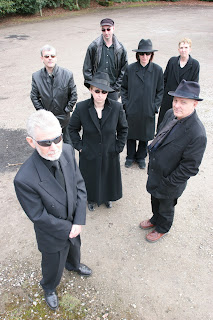 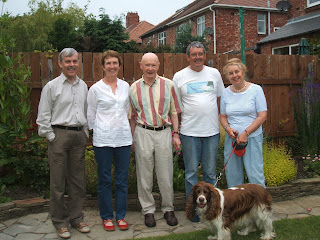 After many years of working quietly away, in recent times, Ann has found fame and fortune thanks to the televising of her series about Vera and about Shetland's Jimmy Perez. Her story is a happy one. Her career (because she was writing good books many years before she became widely-read; I vividly recall us discussing how modest an income one could manage to live on as a writer) is a good example of why one should never lose faith. Yet she's always remained a good friend to readers, writers and libraries. Part of the point of the CWA Diamond Dagger, in the view of the CWA committee, is that it recognises not only the sustained excellence of a person's body of work but also their overall contribution to the genre. Nobody can be in any doubt that Ann is a very worth winner indeed.
Posted by Martin Edwards

Really excellent news! I love Ann's Shetland books and was thrilled to meet her at a local crime fiction festival some years ago: she was charming and a delight to talk to. I ought to read some more of the Vera books, too...but I'm afraid I'm one who doesn't enjoy TV versions of books I love, no matter how well done they are.