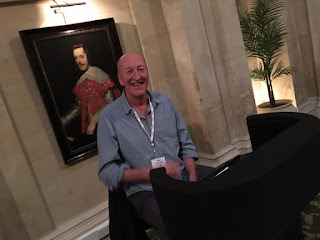 I've returned from Crimefest in Bristol to a ton of work, but in high spirits after a lovely week-end. Thanks as ever go to Adrian, Myles and Donna, the organisers, along with their team of helpers. There were many highlights, but one that i didn't expect was to find that I was longlisted for the CWA Short Dagger, for my story "Murder and its Motives", which appears in the Detection Club anthology I edited last year, Motives for Murder (Sphere). What's more, three other stories from the book made the longlist, much to my delight 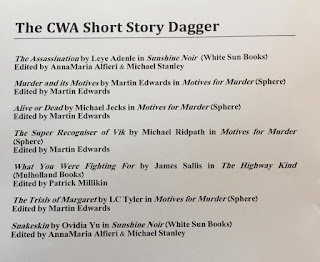 In case you're wondering, as Chair of the CWA, I keep a distance from the Daggers process, which is in the hands of a large number of capable and independent judges and Dagger Liaison Officer Mike Stotter. The independence of the Daggers judging process is part of the reason why the awards are held in such high esteem around the world. One publisher expressed dismay to me that a particular novel by a talented author hadn't made one of the longlists. But whilst I can always empathise with disappointment, publishers simply can't influence the judges, and that's the way it should be. We may not always share the judges' taste, but such is life.

The convention kicked off for me, as usual, with the Authors Remembered session. I moderated a panel comprising Sarah Ward, John Lawton, Andrew Wilson and Jane Corry, and they did a great job of interesting the audience in a range of writers from Patricia Highsmith to Elizabeth Daly. There was time for a quick bite to eat before the traditional pub quiz, run by the admirable Peter Guttridge (photo above). My team managed to win, and we had a very convivial time of it. 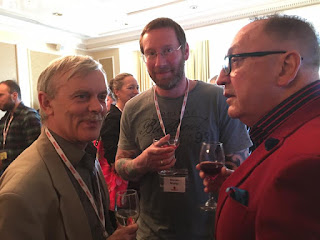 The Dagger announcements took place on Friday, and was followed by dinner with Thalia Procter of Little, Brown, publisher of Motives for Murder. My fellow guests included Peter Lovesey and the incomparable Ali Karim, whose company I always enjoy. Thanks also to Ali for his photography and video work. Saturday was a busy day. I interviewed Peter Lovesey, one of the guests of honour, and then took part in a panel moderated (extremely well) by Kevin Wignall. Then came an enjoyable drinks reception and the banquet. Ali videoed the interview with Peter and the film will shortly be available on the shotsmag website.

On Sunday, I moderated another panel, this time on the short story. Given that my panellists were Len Tyler, Janet Laurence, Peter Lovesey and Ann Cleeves, it was a great pleasure and a great way to end  a fantastic few days.
Posted by Martin Edwards

Congratulations--both on your story and on so many from this anthology!