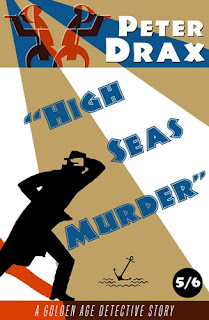 Years ago, I came across a brief mention in a reference book of Peter Drax as one of those writers who followed in the footsteps of Francis Iles, Bruce Hamilton, and C.E. Vulliamy as an author of realistic, ironic crime novels. Intrigued, I strove to find Drax's books, but they were hard to find. Eventually I was pleased to come across one, but they have remained elusive. Until now, that is. Dean Street Press have just reissued the six books that Drax published during his short life, and Rupert Heath of DSP recommended me to have a look at High Seas Murder, which I'd not encountered before.

Rupert was right - it's a really good book. It was first published in 1939, and was the last novel Drax (whose real name was Eric Elrington Addis - I can see why he opted for a pen-name) produced in his lifetime. His crime writing career began in 1936, so he flourished only briefly. A senior naval officer, he was killed in a German air raid on Alexandria in 1941. After his death, a seventh book was completed by his novelist wife Hazel.

Drax spent much of his adult life as a sailor, though he retired from the Royal Navy in 1929, and practised as a barrister until the war broke out. His knowledge of the sea informs this book, and the authentic feel of the story adds to its quality. But what I find very interesting is the fact that the story focuses almost exclusively on working class people in the fishing port of Gilsboro. The lawyers and the cops play only a minor role.

Although (rather oddly) he is not the first character to whom we are introduced, the central protagonist is Carl Swanson, captain of a local fishing ship. His personality is key to the story - and it's a sign of Drax's skill that the final paragraph contains a clever twist that casts fresh light on Carl's psychological profile. There's a doom-laden feel to the story that today would undoubtedly be described as "noir". The writing is crisp and gripping, and Gilsboro is well-evoked: Curtis Evans' informative introduction doesn't suggest any real life model for the town, and though I have two or three candidates in mind, it may be an amalgam of several towns Drax knew. This is an enjoyable example of the ironic Thirties crime novel, different from Iles', Hull's, and Vulliamy's work yet certainly worthy of being associated with it.
Posted by Martin Edwards