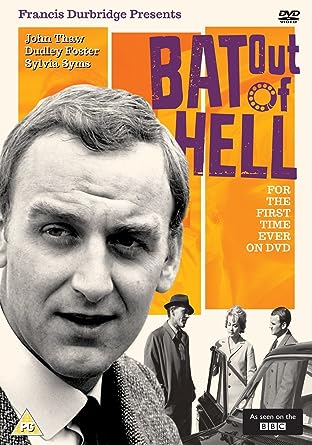 My introduction to Francis Durbridge came when I was a boy. I happened to watch his TV serial Bat Out of Hell when it was screened by the BBC in 1966. Not long before, I'd discovered Sherlock Holmes and Agatha Christie, whom I still admire. And Durbridge, too, is a master of the crime genre, with a particular flair for the cliffhanger. I've watched and listened to many of his serials for TV and radio, and read many of his books. But Bat Out of Hell remains my favourite of his works.
There are several reasons for this. First, it's not formulaic. In fact, the structure is highly original. We are presented, it seems, with a classic "inverted mystery" scenario. Geoffrey Stewart is a wealthy estate agent but his marriage to the much younger Diana is fraying. We soon discover that Diana is having an affair with Mark Paxton, who works for Geoffrey, and that they are conspiring to murder him for his money. The crime is duly committed - but then the fun really starts. For the body vanishes, and Diana receives a telephone call, evidently from Geoffrey. For good measure, a body turns up in the spot where Paxton had intended to bury Geoffrey. But the corpse isn't Geoffrey's.

All this in episode one, lasting a mere half hour. Old TV crime shows often suffer from a lack of pace by modern standards, but not Bat Out of Hell. The twists keep coming, as relentless as they are baffling. I can't think of any inverted mystery with such an ingenious plot, and the investigating detective, Inspector Clay is truly remorseless as Paxton and Diana find themselves living a nightmare. Durbridge's novelisation of the story, by the way, is a good one, and a few years back I encouraged Arcturus to republish it in their Classic Crime series. Copies are still easy to find.

Back to the TV series. Apart from the cleverness of the plot, the impressive pace, and a memorable cop, the five-part show also benefited from a superb cast. Paxton is played by the young John Thaw - yes, Inspector Morse himself. Diana is played by Sylvia Sims, at her most beautiful. The inspector is played by Dudley Foster, a terrific character actor whose career was sadly ended when he committed suicide. The supporting cast, also very good, includes Noel Johnson, Patsy Smart, and June Ellis, best remembered for appearing in the "Waldorf Salad" episode of Fawlty Towers.

And here's another little gem for fellow trivia lovers. Half-way through the first episode, I was startled to hear a piece of background music that seemed very familiar. But I know it as the theme from Callan, a TV series of a later vintage. It was given the title "Girl in the Dark" and was a piece of stock library music. The composer was Jack Trombey, who later wrote the theme for Van Der Valk, which became a number one hit as Eye Level for  the Simon Park Orchestra.

I'm delighted that Bat Out of Hell is now available on DVD, and I loved watching it again, fifty years on. It's worn better than many TV series of that era, in my opinion. And I can see exactly why it made a very big impression on the admittedly impressionable young Martin Edwards.

I have just ordered this for my husband's birthday - he will love it, right up his street.