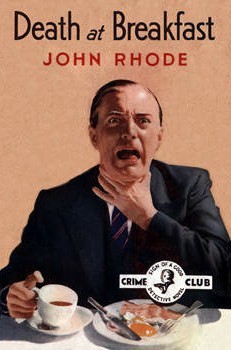 John Rhode was probably at the height of his fame when he published Death at Breakfast in 1936. It's long been a hard-to-find novel, but not any more, thanks to a paperback reissue by Harper Collins which uses the splendid (if not quite true to the storyline) original cover artwork. It's another example of a reissue that, a few years ago, would have seemed an impossible dream.

But is it any good? Well, yes, I think it is. This isn't an entry in the publishers' Detective Story Club, so there is no introduction, but there is a prologue - not a device that Rhode commonly used, I believe, though I have to say that there are over 100 of his detective novels that I haven't read. We're introduced tot he miserly and unpleasant Victor, who is anticipating some kind of mysterious windfall. Suffice to say, the reader is not heartbroken when Victor quickly meets his death as a result of nicotine poisoning.

At first, suspicion falls on his half-sister and her brother. But soon it becomes clear that the mystery is more complex than seemed to be the case. Superintendent Hanslet and young Jimmy Waghorn make a nicely contrasted pair of detectives, but for all their talents, they find it necessary to consult Dr Lancelot Priestley when the puzzle become hard to solve.

Hanslet is not impressed by some of Priestley's reasoning, and naively concludes that the great man, who is getting on in years, may be losing his grip. Nothing, of course, could be further from the truth. I figured out the central trick in the story quite some time before the two cops, but that didn't much lessen my pleasure in an entertaining mystery. Rhode was a capable craftsman, and he built his plots with care. This is a pretty good one.
Posted by Martin Edwards

I think there's a market for many of the old crime novels of which few seem to be reprinted. I used to love 'The Toff' and 'The Saint' series to name but two. They'd appeal to those who don't want their crime to be too raw and/or horrific.