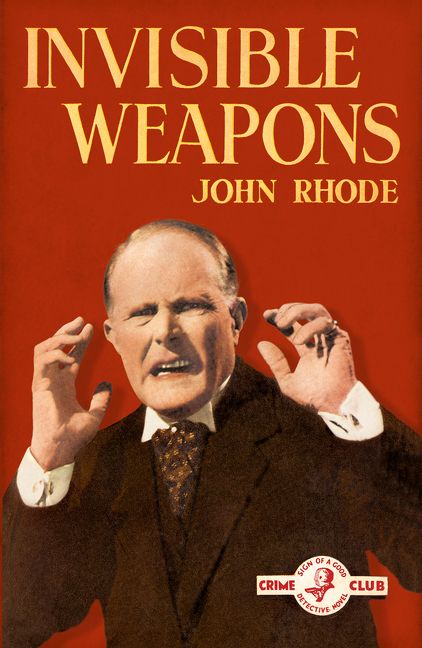 Invisible Weapons, first published in 1938, is one of John Rhode's innumerable mysteries; it's been hard to find for many years, but has now reappeared in a new paperback edition from Harper Collins. Rhode fans will, I'm sure, be absolutely delighted, as the chances of finding a first edition in decent nick at an affordable price are negligible. And it's a story which, in many ways, strikes me as typical of Rhode, both in terms of his strengths and his weaknesses.

Let's take the strengths first. The book is divided into two parts, and concerns two distinct crimes (although it's surely not a spoiler to reveal that there is a connection between them). The first victim is an elderly man, who is murdered in highly mysterious circumstances in the home of a doctor, while a police officer is present in the house. It's a locked room killing, and nobody can figure out how the crime was committed, even though there are strong reasons to suspect the doctor, who has been living beyond his means, and whose wife was the deceased's heir.

When the riddle is finally solved by Dr Lancelot Priestley, it turns out to be a variation of an old trick, but very pleasingly handled. There's also a complicated puzzle about the death of a rich and soon-to-be-married man in the second half of the book. Once again, Rhode deals with the mechanics of the crime in an assured way. He was a man with a practical turn of mind, and like Dorothy L. Sayers, he was rather more interested in howdunit than whodunit.

But, unlike Sayers, he had no ambitions as a literary stylist, and therefore the culprit's ingenious m.o. is the focus of interest. The culprit's character and motivation are of very subordinate importance, and here, as so often with Rhode, I found this a little frustrating. A murderer who indulges in such over-elaboration really deserves to have his crime investigated by a sleuth as formidable as Priestley!