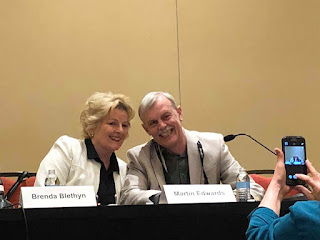 I'm back home from Malice Domestic 30. Malice is an excellent convention that I've recommended before and will definitely be recommending many times in the future; it's for all those who enjoy the traditional mystery. It's also very slickly organised by an experienced Board whose hard-working members are committed to making sure that everyone has a great time. This year, the convention moved to a new hotel, still in Bethesda, Maryland, and conveniently close to a Metro station, so that I was able to fit in some sight-seeing in Washington DC before the festivities began. 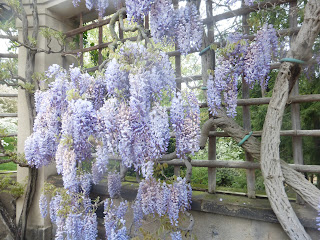 Those sights included the lovely garden at Dumbarton Oaks, where the spring blossom was gorgeous and memorable, and the famous steps which feature in the film of The Exorcist. Naturally, I fitted in second hand bookshop or two, though for once I resisted the temptation to purchase, knowing that many good books would await me at Malice. Washington DC is a marvellous tourist spot, and the Georgetown area is among its attractive destinations. For dinner,  a historic restaurant with the irresistible name of Martin's Tavern proved a brilliant recommendation, not just because the food was good but because it's a place brimming with atmosphere and history; among other things, it's where JFK proposed to Jackie. And when the sun shone, I even found myself reading a book for an hour in the improbable setting of the middle of a busy roundabout, at the rather appealing Dupont Circle. 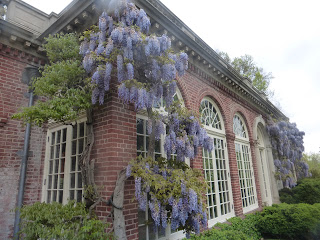 This year's recipient of the Poirot Award was Brenda Blethyn, twice-nominated for Academy  Awards, and now renowned as DCI Vera Stanhope. As last year's recipient, I was asked to host a discussion with Brenda and Vera's creator, Ann Cleeves. There could have been no easier or more pleasurable task, and the vast ballroom was packed. My thanks to Elisa Varey for the photos. The following day I was on an Agatha nominees panel with Cindy Callaghan and Mattias Bostrum, and then on Sunday Kristopher Zygorski moderated a panel about the darker side of traditional fiction with his customary verve. 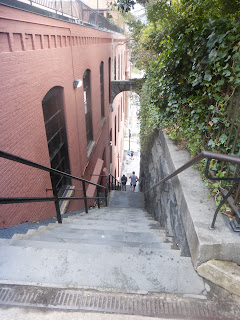 As always at these events, there was a chance to catch up with old and valued friends, such as Doug Greene, Josh Pachter, Shelly Dickson Carr, Les and Leslie Blatt, Shawn Reilly Simmons, Catriona (who is in the photo with me below), Cathy Ace, Michael Dirda, Janet Hutchings, and many more, as well as to make new ones - Mattias, Patricia Gouthro (who interviewed me for a research project), and Gabriel Valjean among others. 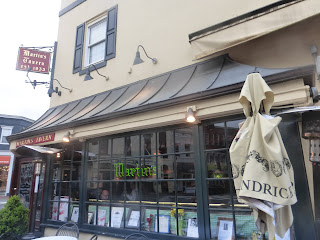 These contacts are a hugely enjoyable part of a convention, even if at times the whirl of activity can become a bit overwhelming. I have to admit that I was running out of energy before the time came to brave the long double flight back to Manchester, and I've arrived home rather wearily. But I need to spring back into action soon - my next flights and next festival are next week... 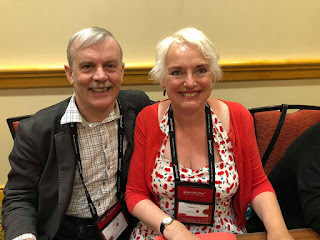 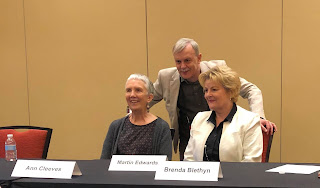 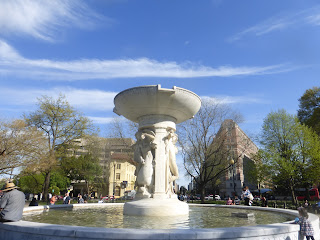 Martin, lovely photos. The only place I've been back east is to NYC.

I have to say, "those" steps - they give me the chills every time I see them, which isn't very often. Did you get any kind of a vibe hanging out there for a short time?

Thanks, Tonya. One very striking feature of the steps during my visit was the number of people treating them as a place to exercise! Not what I expected, but memorable.