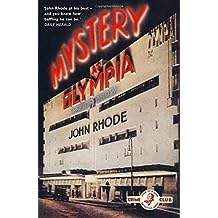 Not so long ago, the prospect of five of John Rhode's detective novels being republished as mass market paperbacks seemed as unlikely as the solutions to some of his more technically complicated mysteries. Rhode's books have long been popular with collectors (or at least, collectors with deep pockets), but the consensus in the publishing world was that there was no real market for them. But the British Library republished two of his Miles Burton novels with considerable success, and this breakthrough has been followed up by Harper Collins, with, so far, three more titles in paperback, plus a hardback of The Paddington Mystery due in June.

I've reviewed Death at Breakfast and Invisible Weapons previously; now it's time to take a look at Mystery at Olympia. This is a story which, on its first appearance in 1935, had a topicality and freshness about its opening scene. Rhode tried to keep up to date, and here he sets the first chapter at the Olympia Motor Show. Among the visitors is Dr Oldland, a chum of Dr Lancelot Priestley, and his professional skills are called upon when an elderly man collapses and dies from no apparent cause. The deceased, it turns out, rejoices in the name of Nahum Pershore, and Superintendent Hanslet soon has reason to suspect that he was murdered - but how, and by whom?

When Pershore's household is investigated, it becomes apparent that there have been some very strange goings-on in the run-up to his death. Someone shot him in the leg, but he made light of it, for some reason. The parlour-maid has been poisoned with arsenic. And another attempt seems to have been made on his life. In this story, unlike many of Rhode's, there's a good-sized cast of potential suspects, with a range of motives, and suspicion shifts around them in pleasing fashion.

So there are plenty of things to like about Mystery at Olympia. That said, it's also a novel that demonstrates Rhode's habitual failings. The first chapter devotes rather more than two pages to a discussion of a new motoring transmission device, but it proves not to have anything to do with the plot, and is simply a form of heavy-handed satire, when - speaking personally - I'd have been more entertained by a page or two devoted to satirising an obsession with cars. But that would have been too much for Rhode, whose love of motoring is also evident from the rather tedious The Motor Rally Mystery.

The murder method struck me as much more chancy than Rhode would have us believe, while the motive is thinly sketched. The same is true of books like The Motor Rally Mystery and Shot at Dawn, where Rhode's lack of interest in humanising his killers makes one as indifferent to their psychology and their fate as Dr Priestley, whose behaviour at the end of this novel offers an intriguing example of a Great Detective doing justice in his own inimitable way. Not a masterpiece, then, but certainly worth a look.

I don't think we'll ever completely agree on the merits of Rhode - while not his best, this is certainly the strongest of the four reprints (six including the BL titles). I'm hopeful that some of his very best work gets reprinted in the next batch, if there is one. I'm guessing BL has passed on more Burton as there isn't any sight of any in the near future but Murder MD and The Three Corpse Trick certainly show what Rhode was capable of.

Yes, the murder method is one which i'd say would have at best a 1% chance of working. Still good to see his work coming back into print - I hope they consider republishing The Davidson Case, as I think that's one of his best books.