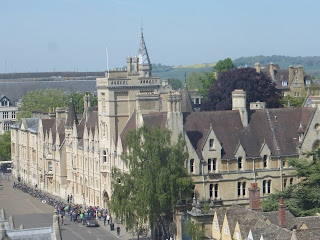 I've touched down briefly at home, just before setting off for an event in Cockermouth in Cumbria later today. This has been as hectic a three-week period as any I can remember in my career as a crime writer, since during that time I've visited New York City, conducted a lecturing course on Queen Mary 2, accompanied a party of American crime fans around Oxford (including a trip to Balliol, seen in the photo above from the cupola at the top of the Sheldonian Theatre), and finally taken part in a festival in the north east of England with my friends in Murder Squad.

Before long, I'll be telling you a bit more about this fantastic sequence of events, as I draw breath prior to a further round of events in June. But whilst I was on the Queen Mary, I received some lovely news that made an unforgettable trip even more memorable.

I'm thrilled to say that Gallows Court has been longlisted for the CWA Sapere Historical Dagger for the best historical crime novel of the year. The novel is in very good company, alongside titles by such fine writers as Abir Mukherjee, Jim Kelly, and C.J. Sansom. The fact that this novel, in which I invested so much hope and energy, writing it without any contract or publisher, as an attempt to do something "completely different" as a writer, has now been nominated for two separate awards is a source of great joy. It was a gamble, to say the very least, and I'm very happy that it's paid off.

But there is more. I'm equally delighted that "Strangers in a Pub", a short story featuring a new pair of characters, which I contributed to Ten Year Stretch, the CrimeFest anthology that I edited with Adrian Muller, has also been longlisted for a CWA Dagger, the Short Short Dagger. It's the fourth time I've been nominated for that particular Dagger, and the second time in three years that I've been longlisted for two Daggers in the same year. I really have to pinch myself to believe that this has happened. I feel very fortunate.

Because of my commitments on the Queen Mary, I wasn't able to attend CrimeFest (where the Dagger announcements were made) this year, the first time I've ever missed it. But when I heard the news on board the ship, I was quite overcome. It made a very special trip even more special.
Posted by Martin Edwards