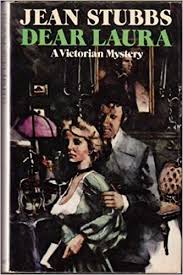 The rise of the historical mystery can be dated to the 1970s (although some good examples were written much earlier). An especially strong Victorian crime story is Dear Laura by Jean Stubbs. So good, in fact, that it was nominated for an Edgar. It remains, I think, the outstanding achievement of a capable, Manchester-born author whose wrote a variety of books including a short series featuring the Victorian cop Inspector Lintott. She wrote some novels directly inspired by real life crimes, but this is a story of her own invention.

This is a Lintott novel, and he is called in following receipt of anonymous letters which suggest that Theodore Crozier, a Wimbledon businessman (he runs a toymaking business; I was slightly sorry not to hear more about this) whose death has been attributed to natural causes was in fact murdered. Hid body is exhumed, and sure enough it emerges that he was killed by a fatal dose of morphine.

We are presented with a classic emotional triangle. Crozier was a cold man, and his attractive young wife Laura, having presented him with three children, is fed up with their marriage. Consolation is supplied by her brother-in-law Titus, a ladies' man who is charming but feckless. Lintott, affable but remorseless, probes their affair and also puts the servants of the house under the microscope.

The upstairs-downstairs relationships are very well done, and there's an especially powerful presentation of a cruel nanny. There are lashings of period detail, and just occasionally the painstaking research shows itself a bit too obviously. But overall, it's very well done, and the story progresses in leisurely but engaging fashion. Lintott is an extremely good character, very well portrayed. I'd rank this, alongside Julian Symons' The Blackheath Poisonings among others, as one of the most enjoyable Victorian history-mysteries.
Posted by Martin Edwards

I remember reading this while in my Gothic Mystery phase, and loving it because it was more than just the average mystery/romance.

Thanks for commenting, Laurie. I agree that it is far above the average and I very much enjoyed reading it.

Way back when...this was one of my favorite books also. I had no idea that it was held in such high esteem (ie, nominated for an Edgar) and I'm going to slip it into my TBR pile. Thanks for reactivating it!

Definitely worth a re-read, I'd say!