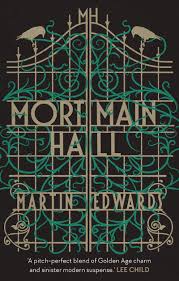 Mortmain Hall is published by Head of Zeus on Thursday. For me, it's an exciting moment, and a book I really care about enormously. But as you can imagine, plans have changed rather dramatically in recent week, as they have for everyone else in the world. I was scheduled to appear at a variety of events at Southport, Chester, and York, over the past few days, with a festival at the University of Chester next weekend. Of course all these events have cancelled now, as have all my events for several months ahead. I'm so sorry that I won't have the chance to meet those who had booked. Never mind, many of the events are going to be rescheduled when the current turmoil is (one hopes) behind us.

As far as Mortmain Hall is concerned, naturally the focus has now shifted to various forms of online promotion. And like so many other people (and there really are a lot of inspirational folk out there), I'm trying to find ways of doing something positive rather than simply feel overwhelmed by the strangeness of what is happening. I've also been very glad to hear from a number of friends from around the world (including some of the nice people I met in China, who have been living through this experience for longer than those of us in the west). Everyone's adapting in their own way.

One experiment I've tried is making videos about detective fiction topics. The first one, about Cluefinders, has just been inflicted on an unsuspecting world, and I've been gratified by the reaction to it. So gratified, in fact, that I've been working on a couple more videos, which will air in the near future.

I've also set up an Author Page on Facebook as a means of connecting more widely. I'm no expert in these things, but I believe you can access it even if you're not on Facebook yourself. Here is a link - https://www.facebook.com/MartinEdwardsBooks/?modal=admin_todo_tour  Or simply google Martin Edwards, author, Facebook

Midas, the publicists hired by Head of Zeus to help to promote the novel, have kept me busy in a variety of ways. I've been hard at work on articles for Writing Magazine, Crime Time, Shots, and several blogs, and I've guest edited the summer edition of NB Magazine. I've also written a new Golden Age short story for the magazine My Weekly.

And there is an extensive blog tour - no fewer than 27 bloggers have been kind enough to take part - amazing! I'm really grateful. More of that another day, but in the meantime I should say how delighted I am by the reaction of the first two bloggers to have reviewed the novel.

Vincent kicked off the blog tour with this https://vincentsbookcase.blogspot.com/2020/03/martin-edwards-mortmain-hall-blog-tour.html">lovely review
saying "Mortmain Hall has to be one of the best mystery books I have read". Wow...
And there's also a very nice https://www.draliceviolett.com/mortmain-hall-by-martin-edwards">review
from Dr Alice Prescott.
So I'm in good heart and I'm pleased the reviewers are picking up on the dark humour. This wasn't much of a feature of Gallows Court, but it's much more significant in Mortmain Hall, and was one of the ingredients that gave me a lot of pleasure during the writing.

Amazon shipped Kindle version seconds after midnight. Half six now, and I have to go to bed without finishing it.