Peter Lovesey has enjoyed - and continues to enjoy - a remarkable career. This year sees the 50th anniversary of the publication of his first detective novel, the prize-winning Victorian mystery Wobble to Death. The book launched Peter as a crime writer (he'd previously written a book about athletics) and led to an eight-book series featuring Sergeant Cribb, which resulted in two television series. 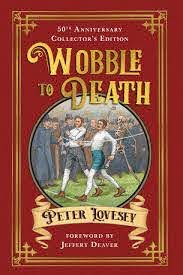 Since then, Peter's writing has ranged widely. I reviewed his latest novel, the excellent The Finisher, earlier this year. It's another in his long series featuring the Bath-based cop Peter Diamond. In addition, he's produced many excellent novels, including stand-alones such as The False Inspector Dew, which remains one of my favourite mysteries. On the Edge, a less well-known novel, is another that I very much enjoyed.

Peter takes great pleasure in writing short stories - I've been fortunate to include several in anthologies that I've edited - and this enthusiasm is reflected in the excellence of his work. I'd argue that he is probably the finest living British exponent of the short mystery. He takes full advantage of the flexibility of the short form, which makes a perfect showcase for his literary versatility. It's his willingness to keep doing things differently, his refusal to be content with the formulaic, that has kept his writing fresh and enjoyable for so long.

His American publishers, Soho Press, have celebrated this remarkable anniversary by producing a special collector's edition of Wobble to Death. It's a lovely production, with a foreword by Jeffrey Deaver and a characteristically entertaining afterword by Peter himself. For the Lovesey fan in your life, I suggest it would make the perfect Christmas present.

I love this book—and love all of Peter's work. I have a first edition of WOBBLE TO DEATH but otherwise would jump right on this one--and second your recommendation as perfect for holiday gift-giving! Now who ELSE do I know who might appreciate...? :-)

Thanks, Art. I might have guessed your impeccable taste would ensure that you are a Peter Lovesey fan!

Martin, which is your favorite Sergeant Cribb novel? I have a hard choosing between Invitation to a Dynamite Party and The Detective Wore Silk Drawers.

Good question, Ted. As ever, it's tricky to choose just one. I might be tempted to go for Waxwork.