More from the British Library

The British Library publications department is responsible for putting out a wide range of titles. Of course, my prime concern is with the Crime Classics, but I enjoy a good many of their other books. So today, as Christmas looms in the distance, I thought I'd mention some of these.

There's no better place to start than with Yesterday's Tomorrows. The sub-title is The Story of Classic Science Fiction in 100 Books. So yes, it's a sci-fi equivalent to my own volume of musings about Classic Crime titles. The author is Mike Ashley, who is so prolific as to make me feel rather indolent. I've never met Mike but I've contributed to some of his anthologies and I find his commentaries and insights consistently interesting. One of the books Mike discusses in this enjoyable volume was of particular interest to me. It is The People of the Ruins by Edward Shanks, published in 1920. It sounds quite fascinating and I'd like to read it, especially since my wife is a member of the Shanks family. Edward was, in his day, a well-regarded poet and critic and his other books include a good biography of Poe. 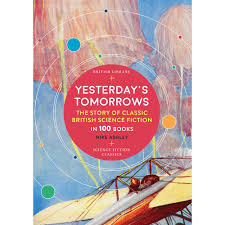 Mike Ashley has also edited a number of sci-fi anthologies for the British Library. I should say that I've only dipped in briefly to these so far, but the topics are interesting. Nature's Warnings, for instance, is a collection of stories of 'eco sci-fi'. One of the contributors is the American Elisabeth Sanxay Holding, better known as a high calibre writer of domestic suspense.

The British Library's anthologies of 'weird tales' are also of interest. Chill Tidings is a set of 'Dark Tales of the Christmas Season' edited by Tanya Kirk. Into the London Fog contains 'eerie tales from the weird city' and is edited by Elizabeth Dearnley. And there is a nicely produced hardback collection of The Gothic Tales of Sheridan Le Fanu, edited by X.A. Reyes. Dorothy L. Sayers was a Le Fanu fan - and so am I.

I didn't know that Shanks wrote a science-fiction story. Actualy, I didn't even realize that any of his novels were still in print. The only work of his that I was familiar with was The Old Indispensables, a comic novel about the civil service in WWI. If you want to try reading Shanks, I would highly recomend it. (Interestingly, he also wrote the libretto to an opera by Dame Ethel Smyth, Fête Galante.)

Hello, Kacey. That's really interesting - I've not read either, but I have read his unorthodox novel Old King Cole. I shall try to seek them out.