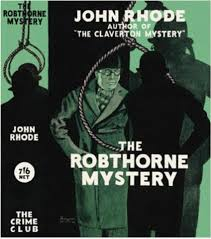 The Robthorne Mystery was first published in 1934, when its author, John Rhode, was at the peak of his powers. He was a popular member of the Detection Club and an exceptionally prolific writer who had already established other punning pen-names such as Miles Burton and Cecil Waye; his real name was Cecil Street. Dr Priestley, who appears in the Rhode titles, was unquestionably in the tradition of the Great Detective. Because he was so productive, Rhode's quality control suffered intermittent failures, but The Robthorne Mystery is one of the most enjoyable of his books - at least among those I've come across (quite a few, but there are still upwards of one hundred to go!)

Recently I was fortunate enough (thanks to a generous tip from Clint Stacey) to acquire the copy of this novel that was originally in the Detection Club's own library. After reading the book, I went back to see if Dorothy L. Sayers had reviewed it (yes, I did collect and edit her reviews, but there were far, far more of them than I can recall). Her reactions seem to have been broadly similar to my own, although the title of the novel wasn't memorable enough in her opinion. We discover early on that this story involves identical twins, and when one of them dies, the twist is foreseeable. Except that Rhode does something rather crafty with this hoary old plot device.

Rhode was, above all, an ideas man. His writing was competent but undistinguished and the same can be said of his settings (in this case, an English village). I presume that his method of composition was to come up with a cunning trick and then build his story around it. Sometimes there was more than one trick. This approach can have disconcerting results, especially as regards story structure and shifting viewpoints.

Here, for instance, a sudden death occurs and is investigated - and then the case seems to be closed. Even Dr Priestley seems to give up. Curious, the reader thinks: perhaps it really was suicide rather than murder after all? We then jump to a related scenario, in which the glimmerings of a motive for murder seem to emerge. But Rhode has more developments up his sleeve...

When all is eventually revealed, I was left thinking that the culprit's behaviour when faced with an admittedly serious threat wasn't entirely convincing. Rhode wasn't much interested in the psychology of crime, and this book illustrates why that can be a weakness. Overall, however, I felt that he kept the story moving along entertainingly from start to finish. He was aiming to write light escapist fiction and this book achieves that objective very nicely.

This is one of my very favourite Rhode titles, and I wish it had been part of the brief run of reprints recently. More people need to be able to read this book before writing Rhode off...

Yes, it's tricky because he wrote so much and some of the books really are not too good. But this one is enjoyable. And it's much kinder to judge a writer by what he gets right than the occasional misfire!

I've read a number of John Rhode novels. I particularly enjoyed "The Mystery of Greycombe Farm" and "Death at Breakfast"; they are ingenious. But, as you say, his novels often rely on characters acting in odd ways, his prose can be like chewing dry straw and - this is not an original comment - he holds back vital information until late on in the story. All of that said, he should have greater recognition as a purveyor of the puzzle element of detective stories.

I'll be reading it soon, Martin. Thanks for pointing it to us.

I've read several new (to me, that is) Rhode titles recently, and this is among the best of them (generally, the books prior to 1950 are likely to be of higher quality, although there are exceptions). It is actually available at present in what seems to be a print-on-demand version, as are Death in the Hopfields (as The Harvest Murder) and Death at the Inn. (I certainly would not recommend the latter, though - I can't help wondering why the publisher chose it.)

Good points, Michael. I agree that both those books, especially Death at Breakfast, are good Rhodes.

Thanks, Jonathan. I haven't read those two, and I won't rush out to get Death at the Inn! He did like his pub scenes, did Rhode...