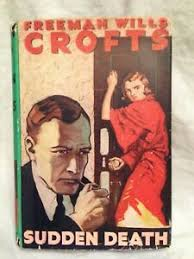 Sudden Death was published in 1932, at a period when Freeman Wills Crofts was experimenting with the traditional detective story. Here he offers a locked room mystery, with not one but two 'impossible crime' scenarios. These have received high praise from astute locked room fans such as Jim Noy of the Invisible Event blog, which indicates that Crofts did a good job of the practical technicalities of mystification.

I'm a fan of locked room mysteries myself, very definitely, but I prefer those which have a touch of the baroque about them. Why? Because the locked room situation is essentially improbable, I think its treatment needs to be something out of the ordinary. Its appeal is that of the paradox - which is why G.K. Chesterton enjoyed writing 'miracle problem' mysteries, some of them first-rate. John Dickson Carr was especially good at laying on the atmospherics. Crofts' plain prose seems to me less well-suited to this type of writing. He had a gift for engineering technicalities, so this book is not short of diagrams or detail as to how the tricks were worked. But for me, the appeal of these things is reduced if I don't have the sense of the dazzling conjuring trick which is a large part of the appeal of the stories of Carr (and of other locked room specialists, such as Clayton Rawson). I enjoy being bamboozled in a melodramatic way, but the minutiae of howdunit don't excite me, maybe because I'm hopelessly impractical myself.

More interesting to me, as a writer certainly but also as a reader, is a point highlighted in the blurb of the first edition: Crofts 'constructed his mystery on novel and interesting lines. The action of the book is seen alternately through the eyes of two persons, Anne Day...and Inspector French.'  The shifts of viewpoint are done pretty well, in my opinion. Anne takes a job as a housekeeper with a man called Grinsmead (who happens to be a solicitor, although his profession isn't significant) and eventually forms a bond with Sybil Grinsmead. Sybil is convinced that her husband is having an affair and wants her dead. And guess what? Sybil dies. But in a locked room...

We think we know what is going on, but Crofts does have a significant plot twist or two up his sleeve. The trouble is that I wasn't convinced by the psychology of the culprit. Would this person have committed crime in that way? I wasn't persuaded that the answer was yes. At the time this book was written, the leading detective novelists were becoming interested in the psychology of crime, and Crofts himself ventured into this area in some of his books, with rather mixed results. Here, his prime focus is on method. This is a readable mystery, and Crofts' desire to try something new deserves praise. Even so, this is not one of my favourites among his books.