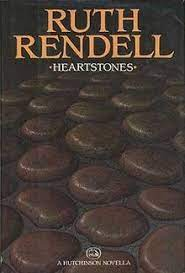 Heartstones began life as a novella by Ruth Rendell. I remember that it was published along with a novella by a younger writer, Helen Simpson (no connection with the Helen Simpson who wrote crime int the Thirties). I read the story when it first came out, way back in 1987. I remember enjoying it - I was a very big fan of Rendell, and at that time she was at the peak of her powers - and I believe I reviewed it for a magazine.

I didn't, however, see the TV version which came along as part of the Ruth Rendell Mysteries anthology series in 1996, and it's taken until the lockdown to repair that omission. The script is by Guy Meredith, and although the decision to turn the story into two episodes of over fifty minutes each mean that there is a bit of padding, overall it's a production which stands the test of time pretty well.

The cast is top-notch - there is even a small part for Idris Elba, playing a young pest controller. Anthony Andrews plays Luke, a handsome canon at a lovely cathedral (I gather the production was filmed at Winchester). His wife has recently died after suffering from cancer, although as the story begins, it seems there is a possibility that she may have been poisoned.

We see events through the eyes of Elvira (Emily Mortimer), the elder of Luke's two daughters. She and her sister Spinny (Daisy Haggard, whose father Piers was the director) have a close relationship, and they are devoted to Luke. When Luke falls for another woman, however (played by Helena Michell), tensions mount and it is foreseeable that there will be fatal consequences. This isn't one of Rendell's best-known stories, but it's pretty good and well worth watching.