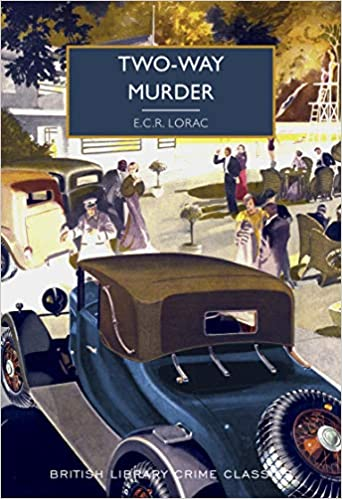 I've been rather consumed in recent weeks by the demands of the novel that I'm writing at present, as well as a series of online lectures and researching future titles for the British Library Crime Classics. But I did want to mark the publication at long last of Two-Way Murder by E.C.R. Lorac. This is book 89 in the Crime Classics series (who would have thought we'd ever manage to produce so many? Not me, that's for sure) but it's unique - because it isn't a reprint. This is a book that was originally written in the 1950s but which has never been published before.

I talked about this book in a blog post last autumn and I must reiterate what a joy it is, after so many years of striving, to see the manuscript I'm familiar with turned into a book on the shelf. It's a different emotion from the experience of seeing one's own book in print, of course, but it still gives me personal pleasure - I feel like a literary detective!

It will be interesting to see what readers make of the story. I'm very encouraged by the positive response of blogger and GA fan Steve Barge, whose views about it happen to be similar to my own. This is the very first review I've seen. Steve explains (and this is entirely understandable) that his expectations were modest, but that he thinks it is 'really rather good'. As he says, the characters are interesting and he likes the 'damn fine trick' played by the murderer.

I'm always inclined to look at things from the author's point of view. I'm as sure as I can be that Lorac would have been absolutely thrilled had she been able to conceive of the possibility of her novel finally being brought to public attention more than sixty years after she wrote it. It is such a shame when decent work fails to see the light of day. I'm genuinely proud of this particular entry in the series.

I've enjoyed this too. It looks as though Lorac was preparing for MacDonald to retire (particularly from reading "Dishonour Among Thieves") which might account for the new detective and the possible new pseudonym Mary Le Bourne.

Martin, do you know why the book was never published in hr lifetime? Was it rejected by her publisher, or was Lorac dissatisfied with it? I'm intrigued.

I discuss this in some detail in the intro, but basically I think she wrote it shortly before she died, and my guess is that it simply slipped through the cracks after her death.

Hope ,we get to read more unpublished legend works like that of Talbot or brand,thanks sir.I m really happy to have another lorac novel !

I first discovered E.C.R. Lorac some years ago through another of her later books, Let Well Alone, which I thoroughly enjoyed, due to the settings and characters as much as anything.

Has been really gratifying to see the success of her British Library reprints, so congratulations on the publication of Two-Way Murder, which shall look forward to reading.