The connections in writing - and in life - interest me deeply. To my mind, they are far more interesting than divisions and barriers, and far more rewarding to explore. For that reason, I have never been enthusiastic about splitting fiction or specifically crime fiction into categories. I can see that labels can be helpful in a library or a bookshop as a means of saving time for browsers, but beyond that, their value is limited. In the same vein, although the vast majority of my writing is in the field of crime, I've enjoyed shifting from fiction to non-fiction and back again, and also trying different types of crime writing. It follows that I'm interested in polymaths, and people who keep trying something new. Maxim Jakubowski, whom I've mentioned numerous times before on this blog, and who has just written a new novel, is an example of those authors who range far and wide in their fields of interest, even when focusing on crime. So when he proposed a guest blog on this topic, I was immediately receptive. Over to Maxim...

''I was recently honoured by being voted in as the Crime Writers' Association new Chair (in the footsteps of Martin and many other eminent names in our field) and must confess that, for a diversity of reasons, I hesitated a long time before agreeing to my name being put forward. Family health considerations aside, I knew how much work is actually involved behind the scenes from having been a member for well over 30 years and on the Board for almost a decade but at the end of the day I didn't demur as I believe the CWA is important for so many of us writing in the crime genre and does invaluable  work to promote it. I am proud of my involvement with it.

But the main reason I had to think hard before taking on the role, is that I felt I was an imposter. Yes, I still review crime fiction on a regular basis and edit possibly too many anthologies -someone has to do it and, again, I can't leave it all to Martin... - but it dawned on me that my last thirteen novels happened not to actually have been crime novels! I will draw a veil on ten erotic books in a series that shadowed the FIFTY SHADES OF GREY phenomenon to lucrative effect and were written under a pen name and touted as the more literary version of FSOG, but then as many will correctly point out most of my crime books preceding these did, to the irritation of many, feature strong sexual elements anyway so my sideways move shouldn't have come as a total surprise. But then what about EKATERINA AND THE NIGHT in which a vengeful woman with seemingly supernatural powers tracks my characters through the years like a fantasy version of KILLING EVE's Villanelle? And then there was my previous novel THE LOUISIANA REPUBLIC, which although primarily about a private detective seeking a missing woman, was set against the background of a future America in the grip of chaos, violence and anarchy caused by the overnight, mysterious disappearance of the Internet and vital data. Lee Child correctly labelled it as a dystopia.

Which brings me to THE PIPER'S DANCE which appears to coincide with this blog post, only a couple of months into my tenure as CWA Chair. I call it a hardboiled fantasy and that is I must confess the nearest it gets to crime and mystery writing.  It begins with the children of Hamelin being beguiled by the Pied Piper and we discover their eventual fate on a mysterious island out of time and follow the love story and flight of two of them, now adults and seemingly immortal, into our modern world where they are pursued by the Piper himself who appears to be a version of the Devil. OK, so Tristan and Katerina do get involved in definite criminal activities along the way , but then they also encounter mermaids and more as their tragic love story develops. Must I apologize for my betrayal of our genre? Of course not. I'd always wanted to write my version of FAUST or Orpheus in the Underground and that is what THE PIPER'S DANCE is. 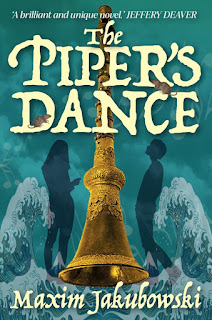 And, anyway, I'm not the only author to write both crime and SF & fantasy. Isaac Asimov, Randall Garrett, Jon Courtenay Grimwood, Ben Winters were wonderful pioneers in cross-genre writing with later 'what if' thriller  mavens like Robert Harris, Philip K.Dick, Jeffery Deaver and others succeeding magnificently in using crime tropes within a science-fictional context; more recently, Marc Behm and now Stuart Turton also admirably walk that thin line between the genres. Because, after all we are at heart storytellers and our job is to come up with plots that will enfold the reader, regardless of definitions.

After due consideration, I have therefore decided not to resign because of my dereliction to crime fiction and would actually encourage other mystery writers to attempt to cross-pollinate the genres; you'd be surprised how both satisfying and liberating it can prove!'