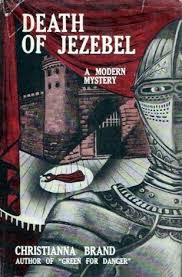 Death of Jezebel was Christianna Brand's fifth novel, appearing in 1948 (the image is of the American edition, which is the one I've read). It's set in London and it is unique in featuring both of her series detectives, Inspector Charlesworth and the better-known Inspector Cockrill, from Kent, who happens to be present at the scene of the crime while on a visit to the capital to attend a conference.

This novel opens with one of Brand's favourite devices, a cast of characters which is truly tantalising. It's a short list of just eight people, starting with Johnny Wise 'who died; and to avenge whose death two of the following also died - and one was a murderer.' So that clears up the murder motive, then, But there is still an exceptionally convoluted puzzle to be solved.

The story proper begins with a preamble set in 1940 in which we see Johnny Wise committing suicide (I have to say I felt he rather over-reacted to seeing his girlfriend canoodling with another chap, and it's not the only example of seemingly excessive emotional reactions in this novel). Then we shift forward seven or eight years. Murder takes place at a pageant, but this is a very different type of story from Victor L.Whitechurch's Murder at the Pageant, a rural country house mystery. Here the pageant is taking place as part of a charitable event at an exhibition (wittily described and slightly reminiscent of the Ideal Home Exhibition) in the Elysian Hall in London.

This is an 'impossible crime' mystery and, as she was wont to do, Brand comes up with a variety of false solutions before all is finally revealed. It's all very complicated, but even though I'm one of those who finds that Brand's style can be a bit irksome and over-done at times, overall I am most definitely a fan of her work. It displays ambition, a desire to do something fresh with the tropes of the genre. This book is not her best, but it does presents a good picture of the period. As with Christie's A Murder is Announced and Carol Carnac's Crossed Skis, post-war confusions about identity play a part in the storyline. Not an easy book to find, but worth seeking out if you can.

Sorry to be a pedant, but Brand actually had Charlesworth and Cockrill star together in another novel as well - "London Particular" aka "Fog of Doubt".

It really is a shame that it's so hard to find this book in the English speaking world. In Sweden, where I am, I never did have any problems finding the translation. :)

Martin - thanks for highlighting this one. It is my favourite Brand novel. Everything works well here for me: Brand’s characters, impossible crime, false solutions considered, resolution/culprit, etc. I have this in hard cover with just jacket and it is a prized possession.

The real impossible crime here though is why this has not been reprinted … hopefully the decision makers at British Library Crime Classics or some other publisher will see the opportunity they have with Brand.

Not an easy book to find

I had an easy time obtaining this book through interlibrary loan here in the southeastern US. Having two competing detectives was interesting. There were so many false solutions and confessions going on at the end that I felt exhausted when I finished it. But it was well worth it. Thanks, Martin, for recommending this one.