Back to Blackstone Fell 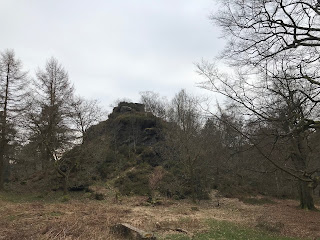 For the past few days, the sun has come out of hiding and I've taken advantage of the chance to relax and get out of doors after quite a hard-working winter. I've recently sent off the corrected proofs of The Life of Crime and the copy-edit of Blackstone Fell, so I've been able to enjoy roaming around a number of pleasant National Trust properties. And yesterday I revisited the spot which formed a crucial part of the inspiration for Blackstone Fell.

This is Hardcastle Crags, a wonderful wooded valley north of Hebden Bridge in Yorkshire. There's a mill, with a tea room (not open every day at present) and on my first visit, just after the original lockdown, the place swarmed with visitors on a sunny Saturday in summer. This time, despite the clement weather, it was all very quiet and I enjoyed the tranquillity.

Ideas for novels often come from various sources. The original notion for Blackstone Tower, which plays an important part in the story even though we never go inside it, came even earlier, from a visit to Salomons Tower in Kent. At one point, I thought I'd take that site as my model for the whole story, but after visiting Hardcastle Crags, I felt that a setting on the edge of the Pennines would give me just what I wanted from this particular story. The Crags were transformed into Blackstone Fell, although the idea for the caves at the base of the crag, which again play a part, came from yet another trip, to Kinver Edge. 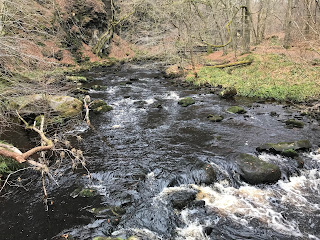 Walking along the stream that runs through the valley yesterday, and skipping over a few stepping stones, I was reminded of a scene in the novel where Rachel Savernake ventures to the notorious Blackstone Leap. The concept of the profound dangers of the Leap came from Bolton Strid, also in Yorkshire, but some miles away from Hardcastle Crags, and said to be the most dangerous short stretch of water in the world.

But the novel begins on Blackstone Fell itself, and an attempt on the life of a journalist called Nell Fagan, who narrowly avoids being crushed to death by a falling boulder. That idea came to me after climbing up the Crags and it was lovely to revisit the scene of my fictional crime, knowing that the book is not only completed, but to be published in September. Can't wait! 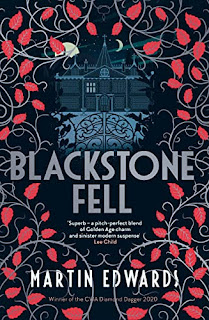