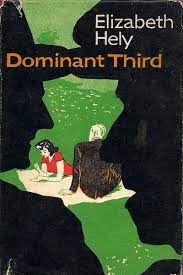 I first became aware of Elizabeth Hely's 1959 debut novel Dominant Third thanks to a laudatory review by John Norris on his excellent Pretty Sinister blog. Some time after that I managed to lay my hands on a modestly priced copy inscribed by the author, but I've only recently got round to reading it. I was tempted to do so after re-reading William Mole's The Hammersmith Maggot. Why? Because Mole and Hely were husband and wife.

Their real names were William and Elizabeth Younger and he was a spy. This novel is dedicated to 'Mole, with love', and it is sad to think that he died only a couple of years later, when still only in his mid-forties. She published just four novels, three of them featuring the French cop Antoine Cirret who plays an important but still subsidiary role in this book.

I found this a fascinating if frustrating story. Hely really could write. She was strong on both characterisation and setting. As for the plot - well, it is intriguing, but flawed. There are signs here of the same amateurishness that - for all its merits - weakens The Hammersmith Maggot. Interest is diffused too regularly and I think this is because of the odd story structure that the authors impose on themselves.

The story is set in France. Newly wedded Mark and Laura Needham seem blissfully happy - although there is a hint of doubt about this - but their idyll is destroyed in the most shocking way, with Laura raped and murdered while Mark is asleep. There isn't much mystery about the culprit's identity - the real question is: how can justice be done? Apart from the killer and Mark, the other key characters are Cisset, Mark's gay friend Alec and his childhood sweetheart Andree. But the viewpoints shift so jerkily that I found myself irritated at times. I don't think Hely thought quite enough about her readers. And this is a real pity, because Hely is doing something ambitious here, and doing it, in many respects, very well. It's a book that doesn't deserve the oblivion that has been its fate, despite the fact that it was televised in the US under the title I'll Be Judge, I'll Be Jury.