A Factotum in the Book Trade - review 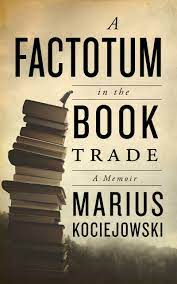 I've met quite a lot of bookdealers but I've never come across Marius Kociejowski, and given that he's retired from the business and wasn't much involved with crime books when he was, I suppose it's unlikely that I ever will. That's a pity, because on the evidence of his recently published memoir, A Factotum in the Book Trade (published by Biblioasis, a Canadian literary press), he's a very interesting chap, someone from whom I reckon I could learn a lot. His book certainly made quite a strong impression on me.

The first thing to say is that I really enjoyed (and gained from) reading it, so much so that I've listened to an interview with Marius and a podcast in which he discusses the book. So when I criticise the book's flaws, please bear in mind that it's only because I think that, with more work, this could have been an absolute masterpiece rather than a marvellous but maddening mix of the brilliant and - it must be said - the banal. An editor is acknowledged at the end, but to be honest, there's minimal evidence of a strong editorial hand. The result is something highly idiosyncratic - or to put it another way, a curate's egg.

There's no real structure to the book. It's a collection of bits and pieces, written during the pandemic and gives the impression of being thrown together in a rush. Now I like discursive writing with plenty of digressions, as anyone who has read The Golden Age of Murder will know, but there has to be a limit to self-indulgence, because writers should respect their readers. Given the defiant refusal to bother with a narrative arc, the absence of an index is baffling. Like Marius, I love books, but I suspect that writing books appeals less to him than it does to me.

Some of the personalised criticisms that pepper the book are unsettling, even though I don't know the people he targets. I sense from his interviews that Marius realises that he overdid things in that respect and I'm sure he's a kinder guy in person than he sometimes appears to be in print. He believes in being honest, but sometimes there's a subjectivity to his blunt opinions that doesn't work for me. It's also a bit odd, as one interviewer pointed out, to write a highly personal memoir that guards one's privacy quite as zealously as this one does. I'm all in favour of protecting personal privacy, but the approach in this case is reminiscent of the have-your-cake-and-eat-it style of the kind of politician he deplores.

The flaws are such a pity because there are wonderfully witty lines (and anecdotes) in this memoir, as well as, I would argue, quite a lot of wisdom and many insights that I find thought-provoking. Perhaps he overdoes the melancholy about the loss of so many bookshops from the high streets. Many of us share his dismay about what has happened, but life always moves on and real books continue to be loved across the world.

Apparently Marius is a poet (and a travel writer) and there's a fine quality to some of the writing that impressed me a great deal. So did his emphasis on ethics in book dealing, though again his criticisms of one or two fellow dealers seemed harsh. Above all, I found it instructive to read a very personal account of one person's passion for the book trade. It's a book that, warts and all, deserves to be a success.

Labels: A Factotum in the Book Trade

This book sounded oddly interesting when I read your comments and I wondered what part of the book trade the author had worked in.

I went off to Amazon where there is an extract of the beginning of the book and found he worked in Cecil Court. As you say, the style goes from fascinating insight and entertaining anecdote to bizarre stream of consciousness.

The reviews are something to behold - only 2 from the UK.

One begins “This is one of the more tedious examples of pedantic pomposity concerning the book trade that I have yet come across.” And ends “The Basil Fawlty of Charing Cross Road rides again.”

The other begins “A hugely entertaining book with high drama at its core.” And ends “Highly recommended.”

So, the literary equivalent of marmite

Thanks, Simon. Yes, it's a mixture, but I'm confident that readers who are intrigued by the book trade will find plenty in it to enjoy. So I'd definitely encourage you to give it a go.