Forgotten Book - When the Devil Was Sick 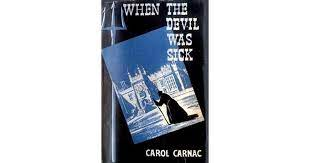 Until a few years ago, as a reader I focused on the books that Carol Rivett wrote under her most prominent pen-name, E.C.R. Lorac, rather than those which appeared under the name Carol Carnac. One of the reasons was that the Carnac books tend to be very elusive. However, I was lucky enough to acquire an inscribed dedication copy of Crossed Skis and, although I'm not interested in ski-ing, I enjoyed the novel.

Some time later, I was delighted when the British Library agreed to publish Crossed Skis as a Crime Classic and positive reader reaction duly followed. Of course, this author was highly prolific under both names and not all the books can appear as Crime Classics, but excellent sales figures mean that it's likely that Lorac/Carnac titles will continue to be reprinted. Meanwhile, I've been reading a shelf-full of them.

Among them is an obscure Carnac mystery - the fifth to appear under that name - with the odd title When the Devil Was Sick. (The title comes, it seems, from an old phrase that I must admit I hadn't encountered before). It's a country house mystery, but with quite a bit of the atmospheric description of rural settings that was a hallmark of this writer. The detection is done by Inspector Charles Ryvett (a surname obviously based on Carol's own real name, suggesting that she had quite a high level of identification with this particular character).

Strange events on Lammas Night culminate in the murder of a mysterious man dressed up as monk. Is he a member of the family in whose mansion he is discovered? The butler is among those who knows more than he is willing to reveal to Ryvett. A very unusual feature of this novel, especially for one written in the Golden Age by a woman, is that amateur boxing plays a part in the storyline. Ryvett is an appealing character and this interesting story is one of a number of Carnac titles which I think deserve a new life in the twenty-first century.

I have been collecting what few books I could of Lorac's prior to the reprints. A few nice hardcovers and a number of battered paperbacks. As long as I could read them, I was happy.
Now that I can get the British Crime Library books I am ecstatic!

Glad to hear it, Chris. I used to buy second hand Loracs for my parents, many years ago. Some are easy to find, but many are close to impossible!

Many thanks to you and the British Library for introducing me to ECR Lorac's works. I've managed to read 15 of them through libraries and e-books. She describes the settings, whether city or country so vividly showing her knowledge and love of the land. Her stories are very creative and her characters whether prominent or minor are so well portrayed. Chief Inspector MacDonald has become a real favorite of mine. I've read all readily available novels. Will continue searching. A belated Christmas blessing from SW Ohio. Paul