The Cathedral of Spilled Blood 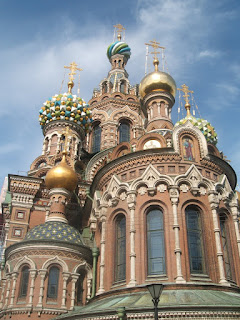 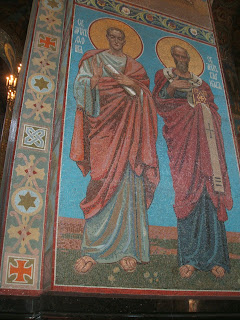 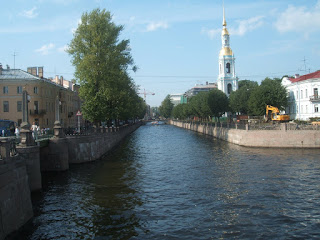 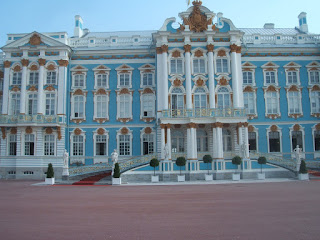 Predictable to a fault, I’m afraid. As soon as I learned that St Petersburg boasted a notable ‘sight’ known as The Cathedral of Spilled Blood, my crime-writing instincts went into overdrive. Within hours, I worked out a story-line that would feature a cruise ship, a trip to St Petersburg, and – naturally – a trip to the cathedral. I duly followed in the footsteps of a group of characters whom I’ve so far only sketched out in my mind.

The Cathedral is stunning, and so is St Petersburg. I have never been to Russia before, but this was one city I have long been keen to visit. It certainly lived up to expectations. We went on a boat tour of the River Neva and surrounding canals – not for nothing is St Petersburg known as the Venice of the North (though I later learned that Stockholm also claims that title). Our trip took us past the Winter Palace and the Hermitage Museum, although unfortunately time did not permit inside tours of those remarkable places.

Another must-see was the Summer Palace, with its fabulous Amber Room, and the Tsar’s Estate. The drive out to Pushkin, where these sights are to be found, took us through some of the magnificent parts of the city as well as past some rather dour buildings and apartment blocks. My overall feeling was that the Russians seem to have managed the transition from the old regime to a new way of life with remarkable accomplishment. I don’t know many Russian people, but those I have come across have been, without exception, charming and cultured, and after this first sampling, I’d like to get to know their remarkable country better.

Martin - Oh, how could any crime fiction writer resist a trip to the Cathedral of Spilled Blood!? Thank you for sharing those lovely 'photos. I'll look forward to the story you're planning, too...

I would be interested to see how you write plots in these beautiful cities. I think you would do a wonderful job at describing the places.

Loved the photos. I have never been there, but many of my friends enthuse over it.

Looking forward to the novel! It is great when inspiration arrives and the seed of an idea is planted in the mind.

Make sure that you write it!

Does this mean you can set the entire cost of the trip against tax as a business expense?
Even without the marvellous name you would probably have come up a plot idea when visiting that fantastic building. My husband and I recently spent our first evening meal on Barra, in the Outer Hebrides, discussing the fictional possibilities of blowing up a CalMac car ferry - I just can't help it. Thank goodness no one was on the table next to us.

My crime-writing countryman Leif Davidsen has traveled a lot in Russia and Eastern Europe, and I am sure he could have done the same, but to be honest I think your story will be more to my taste.

And I know how appealing just the tiniest drop of blood is. Last year swatting a mosquito I started wondering whether one could use the body of a ´full´ mosquito to extract dna (e.g. to prove that a suspect had been in the same room as the insect). One of my biology colleagues thinks it would be possible.

Thanks for your comments, Margot, Clarissa and Aguja.

Hi Janet, I know writers often claim holidays as tax deductible expenses, and no doubt some are cavalier about it, but I feel that it's only legitimate if you can prove that you've done appropriate research for your writing business, and it's a lot easier to justify if you can produce evidence of something written on the foundation of that research.
Any chance of a ferry explosion story from you?!

Dorte - the mosquito idea is very interesting!
I shall have to check out Leif's work one of these days.