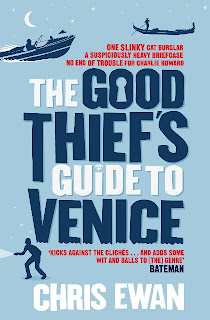 A fellow lawyer who has managed to escape the legal profession to write crime full time (envy, envy!) is Chris Ewan, a delightful companion with whom I breakfasted a couple of times at Crimefest. I've known Chris for a few years now, and to my mind he's one of the UK's up and coming writers, someone with a good body of work already at a young age, but also the potential to become a big name in the genre in years to come. I invited Chris to contribute a post about his latest book; here it is.

'When it comes to crime fiction, there must be something compelling about Venetian bookbinders. The art of bookbinding features, of course, in Martin’s brilliantly sinister (and CWA Dagger Award-winning) short story THE BOOKBINDER’S APPRENTICE. And it also plays a prominent role in my latest Charlie Howard mystery, THE GOOD THIEF’S GUIDE TO VENICE.

I visited Venice on three occasions during the year I spent researching and writing my novel, and I’d been to the city perhaps four times before that. And on every visit I’ve been drawn to the bookbinding shops dotted throughout the narrow, winding alleyways of the city. What’s the attraction? A few things, I think. For one, there’s the chance to appreciate the delicate craftwork that goes into presenting a book in a traditional and beautiful way. Then there’s the smell inside the dingy, cramped stores – of leather and paper and dust – and the sensation of being witness to a possibly dying tradition in a slowly drowning city. There’s also always the chance to spot an unusual or treasured book. But more than any of that, there’s the pleasure that comes from gawping at the reliably eye-watering prices for a specially bound edition of an early Harry Potter novel, signed by one JK Rowling.
When I had the chance to write the GOOD THIEF’S GUIDE TO VENICE, I knew I’d have to set at least some of the action in one of these stores. As it happens, Charlie’s own love of books – or rather, one particular book –­ drives him to break into a bookbinding business after hours. And for once, he’s not simply stealing on a whim. He’s led to the store by a glamorous female cat burglar who swipes his signed first edition of Dashiell Hammett’s THE MALTESE FALCON, leaving a flyer for a bookbinding business in its place. Convinced this is no coincidence, Charlie sets out to get his book back – in his own particular and highly illegal way – only to find himself duped into committing a far more heinous, and way more explosive, crime.

VENICE was a fun book to write, and a joy to research. Who wouldn’t want to creep around the deserted, late-night streets in a damp November, edging towards the grilled and shuttered window of a bookbinders on Calle Fiubera, figuring out how to break-in? Who wouldn’t want to track down a pair of teetering balconies facing one another across a lonely canal, where two love struck burglars could discuss larceny and mayhem? Who wouldn’t appreciate the chance to sample just one more Campari, or a touch more prosecco, from a café terrace alongside the bustling Grand Canal? I thought I knew Venice pretty well before I wrote my book. I didn’t, but I know it a little better now. It’s the most bewitching city I’ve written about so far, and in a parallel world, I’d happily live there. Wonderful food. No traffic. A maze of streets and alleyways to get lost in whenever the mood grabs you. And some of the most fascinating book shops in the world.'
Posted by Martin Edwards

I've been meaning to get to the 'Good Thieves' books for awhile now. This certainly bumps them up the list.

Hi Martin. Thanks for letting me contribute, and more thanks for your very generous words. But don't feel too jealous about my legal escape- I'm just off to do my household chores...

This sounds a great read and I love the book binding connection. I had to do bookbinding at college, so appreciate what it entails.

Thank you Chris and Martin!

Ah, what is it indeed about those bookbinders, second-hand book shop owners, crime fiction writers etc that make them so sinister?

I also had the pleasure of speaking to Chris in Bristol. The funny thing is that I recognized him as one of Donna Moore´s blog friends, he remembered me as one of your friends :)

Seana, you will enjoy them.
Thanks, Aguja.
Dorte, it truly is a small world!
Chris, thanks again.

Hi Seana, Aguja and Dorte. Thanks for your comments and I hope you enjoy the Good Thief if you give the books a try at some point!