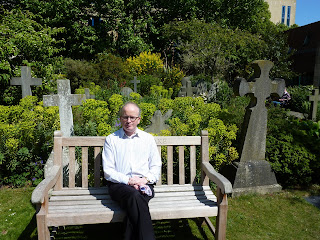 When you attend a crime fiction convention, there is a pleasurable dilemma about how you spend your time. Do you go to as many panels as possible? Do you network avidly? Or do you try to carve out some time for longer conversations, especially with people whom you seldom have the chance to meet? Of course, there isn't a definitive right answer, but in recent years I've done a bit less manic flitting about, and spent more time indulging in a range of fascinating conversations with some of the very interesting people whom I've encountered.

At the recent Crimefest convention in Bristol, I had the pleasure of talking to a number of people for quite a while, among them the Irish writer and researcher John Curran. John is best known as the author of Agatha Christie's Secret Notebooks, a wonderful book which has a follow-up volume due out later this year. He is currently researching detective fiction written in the period between 1930 1950, and his knowledge of the genre is encyclopaedic. Not surprisingly, he was one of the contestants in this year's Crimefest Mastermind.

On the Saturday of the convention, John and I had lunch together and talked endlessly about Golden Age detective fiction, a subject close to both our hearts. So endlessly, in fact, that when the cafeteria at Bristol Cathedral closed, we continued our conversation in the delightful Cathedral garden, where I took this photo of John. And when the garden closed, we carried on the discussion, walking along the very pleasant Bristol waterfront in the sunshine.

John has been researching the Golden Age in the copyright library at Trinity College, Dublin, and has come across all manner of rare books. He told me, for instance, about an Australian book called Murder Pie which was inspired by the Detection Club's The Floating Admiral, and which I'm tempted to try to track down. Because of work commitments, I wasn't able to join the party which John took around Agatha Christie's former home Greenway, much to my regret. Next year, perhaps! In the meantime, the chance to spend a few hours with a fellow enthusiast for long forgotten detective fiction (as well as for the unforgettable Agatha Christie) remains one of the memories I'll take away from this year's Crimefest.

I could feel the passion about crime writing you two guys displayed in this essay; it's great to see.
Best of luck to you both.

Martin - I'm so glad you had the chance to talk with Curran. I'd love such an opportunity :-).

Encyclopaedic? So you mean to say there are people who know more about crime fiction than you? I am impressed ;)

And I almost wish I had found that beautiful garden, but on the other hand this will be my only CrimeFest for years to come so I didn´t want to miss too many panels either.

Thanks, Anthony. Just realised that my original text was misposted, so I have corrected it!

Margot, I hope you get the chance to meet him. Very pleasant fellow indeed.

Hi Dorte, you only just missed the garden, and it is close to the cafeteria where we had lunch!

I love the Golden Age of Crime and have great pleasure in re-reading my fantastic collection again and again. I've just finished reading The Moving Toyshop by Edmund Crispin for about the twentieth time! My other favourites include The Port of London Murders by Josephine Bell, The Silk Stocking Murders by Anthony Berkeley and Blood Upon The Snow by Hilda Lawrence. All brilliant and thoroughly enjoyable.