A Mysterious Affair at Styal 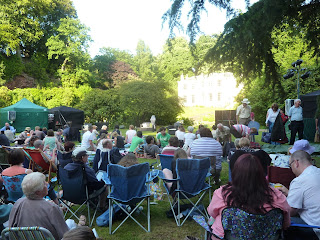 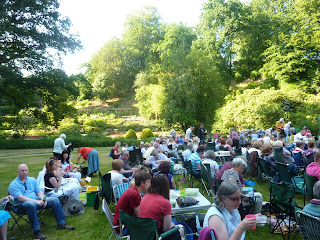 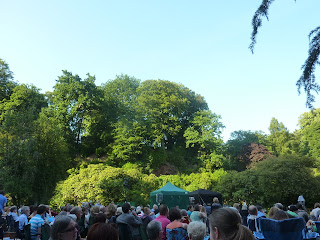 Styal is a village in Cheshire where you can find one of the National Trust's great gems, Quarry Bank Mill, a wonderfully preserved and historically very important slice of Britain's industrial heritage in truly beautiful surroundings. Quarry Bank has been developed steadily in recent years,and not so long ago the garden of the old house was opened to the public. And on Saturday night, for the first time, I saw a play staged in those gardens in the open air - Agatha Christie's The Hollow.

It's a very long time since I watched a play in the open. The last one, a Noel Coward play, was well over twenty years ago. Of course, the weather is always a bit of a worry. But the weather on Saturday evening was superb, a real stroke of luck. And this, coupled with a pre-play picnic, made for a lovely way to end a great day that had begun with a trip around Blackpool's Stanley Park.

Strangely, this was the third Agatha Christie play I've seen in about three months, after not having seen one for many years. They have all been fun, even though I'm the first to admit that she was not as gifted at writing for the stage as she was at writing novels. But a large audience had a great time, not just because of the sunshine, but because Christie knew how to keep people engaged. The performances by members of the Wilmslow Green Room were very good, and I was pleased to recognise at least one of the actors who recently appeared in my own Victorian murder mystery.

The Hollow has never been one of my favourite Christie novels, I must confess. The plot, and the final twist, have never struck me as matching her best. But some of the characters are quite interesting, as is her decision to dispense with Poirot in the stage version of the story. I think that was a shrewd move, and the result was a piece of light entertainment that made for an idyllic midsummer's evening. 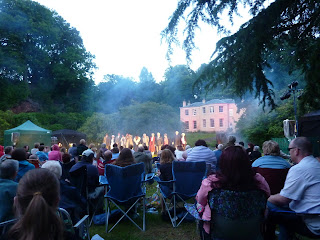 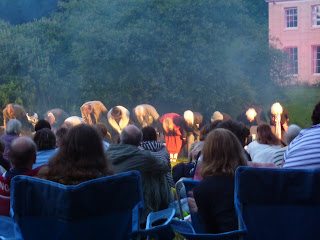 Martin - Oh, that must have been a terrific experience. And what a lovely setting too. Thanks for sharing.

I love The Hollow, Martin. It's one of my top-five favourite Christies. I was about fifteen when I read it. A supply teacher at school told me that when he was at boarding school in the fifties, lying ill in the sick bay, he picked up a copy of The Hollow and read it. He told me it was the only Christie he didn't 'guess'. I read it, intrigued. I did guess the killer, but I loved the atmosphere of the book: the still, sinister swimming pool in the woods; the house itself, full of unspoken tensions. And I loved the characters too. They're vivid in my memory twenty-plus years later. Henrietta, Lucy, Midge ...

The Suchet film of the novel is, I think, one of the strongest of the series. The autumn colours reflect the themes of the book: loss, decay, unwanted change.

I don't think the play's much cop, however. Do you think it tainted your memory of the book?

Thanks, Margot. It certainly was memorable.

Hi Daniel, very good to hear from you. I guess one of Christie's strengths is that different people have contrasting views of what is her best book. I read this one very early on, but I felt the lack of a stunning twist was a drawback. But I think she was pleased with it and I'm sure she'd also have been happy with your response to it. I don't think I've seen the Suchet version.

Oh, you must see it, Martin. It's sublime. Up there with Sad Cypress, Five Little Pigs and Death on the Nile (the Suchet one).

I loved the simplicity of the twist in The Hollow - and it's actually quite a credible bluff on the part of the killer - none of the grand guignol ingenuity of some of the classic Christies. Of course, I know Christie used this twist - or versions of it - several times, but for me The Hollow represents its most subtle use.

Oddly, I quite enjoy the fact that Christie re-used her twists so often. I once heard someone say that she only had four plots. I think she has more than that. I've counted at least five ;-) I can't find anything written about this. Would be a fascinating project.

Hi Daniel, that's a very interesting observation. Have you read Robert Barnard's discussion of her techniques of misdirection in A Talent to Deceive?

Yes, I have, Martin - a few years ago. He does a great job of laying out Christie's tools and tricks of the trade. What he doesn't do (in my opinion) is crystallise her work into plot types. Maybe I'll have a go ;-)