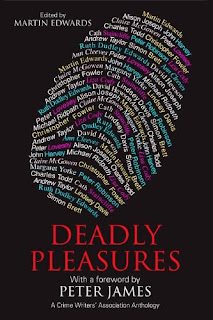 I'm delighted to announce the publication this week of Deadly Pleasures, an anthology I've edited to celebrate the Diamond Jubilee of the Crime Writers' Association. The book is published by Severn House in hardback and trade paperback and will be available in the US as well as the UK.

Putting this book together has been a labour of love, since I've been lucky enough to receive a host of marvellous - and brand new - stories by some wonderful writers. Let me just pick a few at random to give you the idea. John Harvey has written a new Jack Kiley story, which deals with a tricky and highly topical social issue. Peter Robinson has supplied a fascinating story, based on a performance piece that he worked on last year along with the great folk singer Martin Carty. Liza Cody tells us a bit more about the fate of Anna Lee - or does she? Andrew Taylor, who just won (most deservedly) the Ellis Peters Historical Dagger, has contributed a very enjoyable story and so has Peter Lovesey.

David Hewson, recent author of a novelisation of The Killing, has a story in the book, and so does Lindsey Davis, who offers a sort of companion piece to a story she wrote for Mysterious Pleasures, the Golden Jubilee volume I edited for the CWA a decade ago. The other contributors of brand new stories are: Ann Cleeves, Cath Staincliffe,Simon Brett, Claire McGowan, Alison Joseph, Ruth Dudley Edwards, Michael Ridpath, Charles Todd and Christopher Fowler. Oh, and me!

I'm enormously grateful to the contributors, and also to Peter James, who wrote the intro. Let me assure you they didn't write these stories for the money, they just wanted to support the CWA, which is marvellous. There's one story that has been published before. Margaret Yorke, a former CWA chair who contributed to Mysterious Pleasures and other CWA anthologies I've edited, died while the book was in preparation. I wanted to include something by her as a tribute to her, and her family kindly agreed. All in all, it's a book I'm proud to be associated with, and I'm confident crime fans everywhere will love the stories written by some of the best writers around.

congratulations, Martin. I will look for it.

Martin - Oh, I like it!! The cover's appealing and the contributors highly talented. I'm looking forward to reading it.

Since the U.S. release date isn't until November, I've ordered it from my friends at Murder One.

Patti, Margot,thank you!
J, hope you enjoy it.

Hi Martin – Congratulations on the publication of ‘Deadly Pleasures’. You certainly know how to put together a rich and varied anthology, and this promises to be one of your best. Definitely one for my crime fiction shelves!

Ditto ‘The Frozen Shroud’. I’m intrigued over your “slightly different approach” and can’t wait to see how Hannah and Daniel fare in creepy Ravensbank.

I’m hoping to make it to the Wellington Literary Festival for your Ellis Peters talk in October. Any chance of buying signed copies from you?

It’s great news you’ve started writing Lake District Mystery No 7. It’ll be fascinating to read your updates explaining difficulties and dilemmas encountered, and how you’ve resolved them. Tedious it’ll NOT be; you’re never that, Martin!

Very kind, Paul. It will be great to see you again at Wellington. It's been a while!