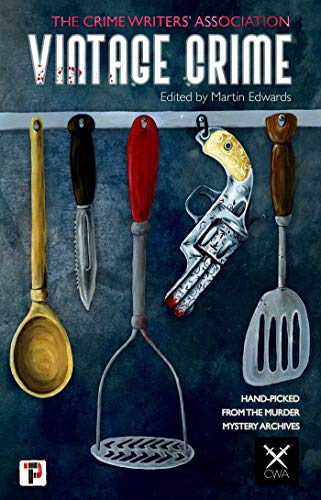 Vintage Crime is published tomorrow. It's my latest anthology to be edited on behalf of the Crime Writers' Association, and it differs from its predecessors in a couple of respects. First, we have a new publisher, Flame Tree Press, with whom I've worked in the past. They are lovely people to work with, and the care they devote to their publications is admirable. The production values on Vintage Crime are terrific.

Second, this is not a collection of newly written stories, but rather a book that is designed to showcase the evolution of the crime short story throughout the existence of the CWA. The CWA was founded back in 1953, and its first anthology appeared in 1956. Since then the CWA has been a major supporter of crime short stories, and many award-winning stories made their first appearance in a CWA collection.

In essence, I've mined the CWA archives to put together a book of stories which have appeared in previous CWA anthologies but which seem to me to deserve a new life. I've chosen stories dating back to the 1950s, written by a range of writers whose names are mostly well-known, including the brilliant Mick Herron and the equally gifted Andrew Taylor, two of the finest authors working in the genre today.

There are some terrific names here, including Robert Barnard (whose "Sins of Scarlet" won a Dagger), Frances Fyfield, Celia Fremlin, Peter Lovesey, Liza Cody - and John Dickson Carr. Yes, the king of the locked room mystery was a CWA member. The contributors have, between them, won enough awards to fill a locked room, and I'm hopeful that many readers will enjoy devouring these mysteries from the (sometimes quite recent) past.
Posted by Martin Edwards

Has there been any recent attempt by a group of authors at a 'combination' story where different writers contribute a chapter each, like 'The Floating Admiral'?

Hello, Trevor. Yes, there has. The Sinking Admiral was masterminded by Simon Brett a few years ago and I was one of the contributors. Writing a chapter in that way was a lot of fun.