I've had the pleasure today of reading a brand new Ann Cleeves story featuring Vera Stanhope which is destined to appear in a new anthology later this year - more about this project in due course. Ann is at least as good a short story writer as she is a novelist, and that is saying something. On the blog this year, I want to talk about a few of my favourite contemporary crime writers, and I'll start with Ann, whose latest novel, The Darkest Evening, is a Vera novel and about to appear in paperback.

When I was working on my first novel at the end of the 1980s, I looked closely at the work of a good many writers, including in particular a group of talented young authors who had emerged in the past few years. These writers were doing some things with the crime story that especially appealed to me, and the fact that they had broken through to become published authors was encouraging, even if they set the bar quite high. They were: Andrew Taylor, Liza Cody, Peter Robinson, Ian Rankin, Frances Fyfield, and Ann. I didn't know any of them personally, of course, but I admired what they were doing with the genre. Although each author has to find his or her own way, you can learn a lot from other people with whose work you are in sympathy. And the truth is that you never stop learning. Which is part of the rationale for Howdunit, to which all six of those writers, now all fellow members of the Detection Club, have made splendid contributions.

Ann's books sell in the zillions these days. We live in a commercial world and sales are naturally driven to a significant extent by the success of two high profile TV series, with another, featuring Matthew Venn, in the works. But the key point is that Ann was a very enjoyable writer long, long before she became a bestseller. As with the other writers I've mentioned, I've been a fan from the outset (indeed, her debut novel is now marketed as a 'Pan Heritage Classic') and I've benefited from many discussions with her about the craft of writing and the writing life. I'm sure that right now erudite people are working on scholarly studies of her books. Here are just a few observations of my own.

The Darkest Evening is set at Christmas. Vera is driving when she gets lost in a blizzard. She happens upon an abandoned car with a small child strapped in the back seat. When she seeks help at a nearby house, she finds that it is Brockburn, where her late father grew up, and which is still in the family. Then a body is discovered in the snow. Notwithstanding her personal connections to some member of the household, she begins to investigate...

There are vintage ingredients here (Lord Peter Wimsey's car was also stranded in The Nine Tailors, for example) but I see this book as belonging to the broader tradition of the country house mystery, dating back to Wilkie Collins' The Moonstone, rather than the Golden Age specifically; Ann is less interested in clueing and puzzle-making than she is in depicting people and place.

She has always excelled at the evocation of landscape. Like Ellis Peters and P.D. James, she is especially adept at capturing the spirit and personality of the British countryside. 'Human Geography', her essay in Howdunit, is a very good explanation of her approach. Her treatment of individuals - not just her empathetic lead detectives - is always sensitive, while the themes and mood of her novels are consistently interesting. Her title comes from Robert Frost, and her use of Frost's poem gives The Darkest Evening extra resonance.

Ann is prolific, and it won't be very long before she writes her fortieth book. There is always a challenge for a writer who produces so much: how can I avoid the formulaic? One way is to employ innovative structures and storytelling methods - Reginald Hill, for instance, was a master of this method. Ann's novels generally follow a traditional pattern, but what she has done is to write no fewer than five series, each with distinct (predominantly rural) settings in different parts of the country. She tends to alternate between different series, and this is one of the techniques that has enabled her to keep things fresh. And it has worked well, to such an extent that The Darkest Evening is in my opinion one of her best books.

Mind you, I have pointed out with rather cheeky glee to Ann that she's not the first person to come up with the idea of a country house mystery set at Christmas in Northumberland. Let me refer you to Mystery at Fallow Grange, second in the Melwyn Hughes series, written when I was ten years old - talk about great minds thinking alike! At that point, I'd never been to Northumberland, and it sounded like a remote and exotic place. And for connoisseurs of the deservedly obscure, here's the first page of that mysteriously unpublished masterpiece: 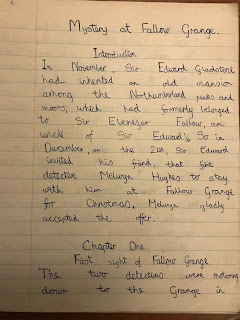 I thoroughly enjoyed Raven Black and I loved the way she captured the internal lens of each character which enabled the third person narrative to gain the insight of a first person narrative.