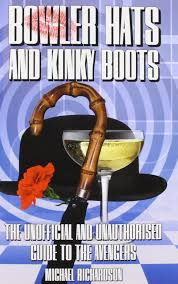 I was lucky enough to grow up in the Sixties, an exciting time for popular culture in Britain. The Beatles, Bond movies, The Prisoner, and much, much more. One of my favourite TV programmes as a young boy was The Avengers. I never saw the early Ian Hendry or Cathy Gale episodes - my introduction to the series (which my parents enjoyed hugely) was with the arrival of Diana Rigg as Emma Peel. And so I've been interested to dip into a reference book about the series published a while back by Telos.

Bowler Hats and Kinky Boots is described as 'The Unofficial and Unauthorised Guide to The Avengers'. Well, it may not be authorised, but it certainly doesn't lack authority. It's a weighty tome, and Michael Richardson must have put a huge amount of work into writing it. The detail (which extra played a stuntman, that sort of level) is at times almost overwhelming.

So, for instance, there is material about unmade episodes (such as 'unmade wild west episode') as well as accounts of how scripts evolved and background info, including mention of a failed rival to the series, The Unusual Miss Mulberry, starring another Diana - Ms Dors - which was never made. The TV world, as I know all too well, is unpredictable. Series that seem to promise much never reach the screen. Series that are made might have been better left in the cutting room. To a large extent, it's a game of chance. But The Avengers went on for year after year. Whilst I think that a decline set in after Diana Rigg left, there was much to enjoy in some of the later episodes.

The point is made that fun was a key component of The Avengers. Yes, the storylines were outlandish in the extreme, yes, they were 'of their time', but the tales were told with such panache that the results, when the series was at its peak, were consistently enjoyable. Michael Richardson's book is a pleasing and in-depth companion to a classic example of television at its most entertaining.

I've started watching some of the earliest episodes that still exist - including two from the Ian Hendry era, one of which doesn't even have Steed in it - and they are still great fun. Back in the 80s Channel 4 repeated some of them - I remember watching "The House That Jack Built" - possibly the most genuinely creepy episode.

Yes, that was a very good one!

Ah, yes, loved the Avengers, and also The Man from Uncle - I can still remember that it was on Thursday evenings and was a highlight of the week,

Absolutely, Chrissie. Curiously, years later I was a regular visitor to the Liverpool industrial tribunal, which was accessed via a tailor's shop - very much like the way into the HQ in The Man from Uncle!

The Avengers lasted so well because each new incarnation of the show had its own flavour. The Cathy Gale era, the Emma Peel era and the Tara King era were all slightly different. And interestingly Steed is a slightly different character in each of these eras.

A very interesting observation, and I can see that it has a lot of force.

I remember that Steed was a very-slightly-shady character in the Cathy Gale episodes. She had trouble trusting him, and sometimes was a bit antagonistic! When Mrs Peel first came on, she challenged some of his methods too, but he came across as more trustworthy then, and of course they developed that flirty camaraderie. I didn't see many Tara episodes but I had the impression he was more of a mentor/hero to Tara.

Cathy Gale had an episode "Don't Look Behind You" that was very similar to the "House That Jack Built" episode, although without the "smart" house. Mrs Gale was as strong and independent in her way as Mrs Peel was (and wore those leather suits first).

Thanks, Marty. I wish some of the episodes were more readily available at present. I'd love to see those I missed as well as some of the good ones I enjoyed