The Art of Reginald Heade

A few weeks ago, I discussed Cover Me, Colin Larkin's excellent study of Pan paperback cover art. This book is published by Telos (who also publish crime fiction, notably the work of Priscilla Masters) and I've now received from them two more lavishly illustrated books depicting cover art from paperbacks of long ago. Both books deal with the work of one prolific artist, well-known in his day, Reginald Heade. 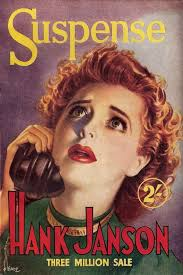 I didn't know anything about Heade or his work before reading these books, though by a coincidence I see that one of his earliest covers was for a paperback original story by Francis Beeding, The Errant Under-Secretary, which was recommended to me recently. During the course of his career, he produced covers for many notable writers, ranging from John Steinbeck, Pamela Hansford Johnson, and Anne Frank to thriller writers such as David Hume and Erle Stanley Gardner. His covers adorned magazines, children's books, romances, and westerns. He produced artwork for comic strips and jigsaw puzzles. He is, however, perhaps most closely associated with the work of Hank Janson, which I have to say doesn't appeal to me in the slightest. Titles like Hotsy-You'll Be Chilled, Slay-Ride for Cutie, and Death Wore a Petticoat speak for themselves. Unfortunately.

But just as you shouldn't judge a book by its cover (though sometimes you can...), so one shouldn't judge Heade by the authors whose covers he designed. He was a highly professional artist, and did what he was tasked to do very efficiently. I find the discussion of his life interesting - and rather sad. I'm not sure I've ever read a story about an artist who specialised in book covers. Thanks to Telos, and these titles, I'm now strongly tempted to write one....

One artist who is well known for the art of his book covers (and movie posters) is Robert E McGinnis.

He also provided illustrations for stories in the likes of The Saturday Evening Post.

I first became aware of him when the Hard Case Crime paperbacks were issued and they had great retro pulp crime covers, many by McGinnis.

I can recommend "The Art of Robert E McGinnis" published by Titan Books.

I love the idea of your writing a mystery novel about a vintage book-cover artist. There's so much potentially great material there for exploration.

Thanks, Keith. I first became aware of McGinnis when I met Art Scott, who kindly inscribed his book about McGinnis to me. Another very talented artist

Thanks, Jeff. I am duly encouraged!

Probably the closest thing to the book you posit was written by my friend Richard Lupoff (alas, recently deceased) is The Cover Girl Killer, St. Martin's 1995. It's one of his Lindsey-Plum detective series. Lindsey, an insurance investigator, is trying to find "the woman on the cover of Death in the Ditch" (a '50s paperback crime title), beneficiary of a millionaire's will. Included with the book was a 48 page paperback with suitably garish Heade-esque cover [borrowed from a genuine'50s Graphic paperback by Stephen Marlowe, Model for Murder]. The search for a copy of the book takes our hero into the world of vintage paperback collectors (one of whom looks and acts suspiciously like me - I collaborated with Dick on his book, The Great American Paperback). I don't recall all the details, but the plot certainly involves identifying & tracking down the cover artist and his model, and I think one key clue was buried in the text of Death in the Ditch.

I have Cover Me and the two Heade books. They are all superb jobs of research and top quality presentation of the artwork.

Thanks, Art, and great to hear from you. I did correspond very briefly with Dick Lupoff years ago, but never met him. I'm intrigued to find that this idea has already been used, but I guess there is nothing new under the sun!