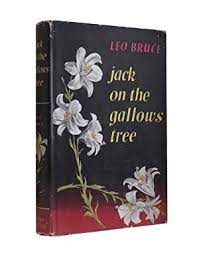 I like Leo Bruce's Sergeant Beef stories, as I've mentioned on this blog a number of times. I haven't, however, talked about his second series, featuring the history teacher and amateur sleuth Carolus Deene. However, the time has come to sing the praises of a 1960 book, Jack on the Gallows Tree. It really is very funny, but at the same time Bruce manages to offer a teasing puzzle about motive as well as whodunit.

Deene has suffered from jaundice and heads off to the resort of Buddington to recuperate. But the real attraction of the place is that there is a teasing puzzle concerning a double murder. On the very same night, two elderly women were strangled. Each was left with a white lily. Plenty of people made have had good reason to kill one of them. But why both, and why on the same night?

There is a lot of pleasure to be had from the minor characters, including the hypochondriac Gilling, the fierce Miss Tissot, the pub landlady who abhors bad language, and two health fanatics, a couple called Baxeter. There are some laugh-out-loud lines. I was also amused by the reference to a book written by Rupert Croft-Cooke - which was Bruce's real name. For good measure, there are witty mentions of two leading crime critics of the day, Julian Symons and Maurice Richardson.

There is one element of the plot that is far from original, but I thought Bruce disguised it pretty well. There are also one or two appealing false solutions and a good climactic scene. For a good blend of mystery and humour, I'd say this book is hard to beat. I really enjoyed it.

I remember this one fondly, though it has been at least 30 years since I read it.

On the other hand, I also read this a long time ago and didn't particularly like or dislike it, though I can't remember enough about it to say why - perhaps I should try another of the Deene titles.

Not sure if my comment went through, there was a glitch; so re-posting:

Many years ago, I read “Death of a Bovver Boy”.

I remember that on the whole I enjoyed it. It’s possible that there was some comedy to the story that I missed. What impressed me most was the motive; it was very disturbing but, as has since become clear, horribly plausible.

I’ve always wanted to read some more of the Deene stories, so might give this one a try.

Dean, Jonathan, Michael, Jamie, thanks very much. I'm definitely keen to read more of the Deene books fairly soon - having spent many years, if not avoiding them, then certainly not being that bovvered about them:) The combination of wit and ingenuity in Jack on the Gallows Tree is genuinely impressive