A Walk Among the Tombstones - 2014 film review 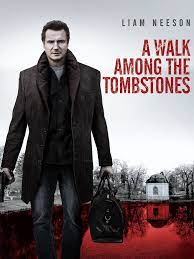 Lawrence Block is one of America's leading crime writers and a winner of the CWA Diamond Dagger. He's not only prolific; he is talented and versatile. More than twenty years ago, I had the good fortune to publish one of his wonderful short stories, 'Looking for David', in an anthology I edited, Whydunit?, and he won an Edgar for it. So I'm not quite sure why it's taken me so long to get round to watching the film of his novel A Walk Among the Tombstones, but I'm glad I did.

The film is scripted and directed by Scott Frank, who was also responsible for the excellent The Queen's Gambit, and this earlier work displays similar virtues of crisp writing. And again Frank benefits from casting a high calibre actor in the lead role. Liam Neeson, who plays unlicensed private eye Matt Scudder does not, perhaps, have as great a range as some actors, but what he does, he always does very well and he's ideal for the role.

A drug addict approaches Scudder and asks him to help his brother, whose wife has been kidnapped and murdered. The brother is a drug trafficker and he's bent on revenge. Scudder declines the job at first, but is persuaded to seek out the kidnappers and learns that they have been responsible for more than one murder. A chat with a cemetery groundsman gives him a lead...

This is a very dark film, set in a New York where it always seems to be raining. The plot is sound rather than brilliant, and the pace is not electric, but Neeson's performance really holds everything together. I always enjoy watching his portrayal of crumpled decency and it's rather a shame that he hasn't appeared in any more adaptations of the Scudder stories.