Back to the Book Fair

Yesterday I drove across the Pennines to Harrogate, where a PBFA book fair was being held in the airy Yorkshire Pavilions - a good venue, I think. It seems scarcely credible, but it's more than two years since I last went to a book fair - at York Racecourse. None of us imagined back in January 2020 what disasters were about to befall the world. So it was great to have a sense of at least some normality returning, even though times remain hard for a good many people, in Britain as well as overseas. 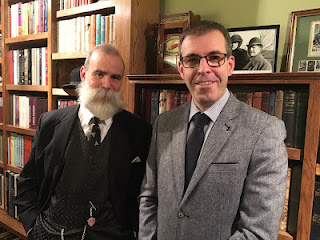 I enjoyed a chat over lunch with Paul Chapman and Mark Jones (the photo comes from their website), two experts on Sherlockiana and much else. Among other things, they host the Doings of Doyle podcast, which is well worth a listen. I first came across Paul back in the 90s when he reviewed a couple of Harry Devlin novels for the late lamented Sherlock magazine and it's good to see things going so well for him.

I also caught up with Catherine Hawley and her husband, who had a bookstall. Looking back at the blog, it's striking to think it's more than seven years since I first chatted to them both at a book fair. Time definitely flies. They were telling me about Leeds Library, an old-established private library which I must go and visit when I get the chance.

Among other familiar and friendly faces was another great bookseller, Jeremiah Vokes, who introduced me to a colleague and fellow dealer Louise Harrison. And James Pickard, as usual, had some terrific treasures on display, including a lovely inscribed copy of Dick Francis's first novel. James has introduced me to the concept of 'shelvability', a term that is sure to crop up if and when I write another story about my book detective, Benny Morgan, who made his debut in The Traitor.

Somehow I managed to restrain myself from making any purchases, but there were some excellent books on display and it was wonderful to be back at a book fair again. The PBFA run some terrific fairs and I can strongly recommend them.