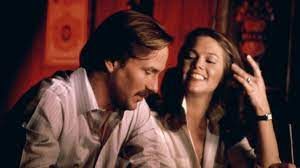 I was very sorry to learn of the death of William Hurt, at the age of 71, and following some years of ill-health. If you search references to him on this blog, you'll find a number of reviews of his films, most recently The Village, which I enjoyed and which were enhanced by his presence in the cast.

To me, though, he'll always be Ned Racine, in Body Heat, one of the most enjoyable crime films ever made. I loved the idea of the slick and slightly sleazy lawyer who, as his friend (played by Ted Danson) said, 'used his incompetence as a weapon'. I've met one or two lawyers like that in real life, but they didn't have Ned Racine's charm. In the photo above he is with Kathleen Turner, who made her name in the film.

Naturally, I referenced Ned in the Harry Devlin series, and I've watched Body Heat several times, always with relish. It's a great illustration of a story and film that is, on the surface, derivative, because it uses well-established tropes and ideas, yet makes something fresh of them. As for William Hurt, he was a superb actor with a truly impressive range.