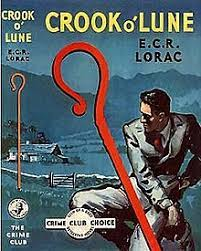 E.C.R. Lorac has become of the most popular authors in the British Library's Crime Classics series, something which causes me considerable pleasure. I am a fan, but it's also true to say that because she was so productive I still have a lot of entertaining reading ahead of me. The latest book I've devoured is Crook O'Lune, published in 1953. It is a good one, and what's more, as I explained on Monday, it prompted a very enjoyable trip to Lorac country last weekend.

At first, though, I wasn't sure if I was going to love the story. It begins slowly -very slowly. Gilbert Woolfall arrives at Kirkholm Station (based on the real-life Hornby station, which no longer exists) and enjoys an exhilarating walk through fell country. He has inherited a house at High Gimmerdale - which is a fictional version of Roeburndale. In the first three chapters, Lorac presents us with a lot of background information, and although it is relevant, it does mean that the pace and mood are rather low-key. I'm surprised she didn't try to integrate the factual material into the story in a more exciting way.

That said, things begin to warm up once Chief Inspector Macdonald arrives on the scene. He is on holiday - and is thinking of buying a farm in the area - but we all know what happens when fictional detectives go on holiday, don't we? Soon there are stories about sheep-stealing and before long there is a case of arson which has fatal consequences.

From then on, we have Lorac at her best. The characters are well-drawn and presented, for the most part, with compassion as well as insight. The setting is especially well evoked and you can tell how much she loved the area in which she lived. The story, too, turns out to be a pretty good one. All in all, it's well worth hunting for this mystery.

I love the Lorac books as published the British Library. I’ve noticed that other of her novels have been published in kindle editions by Rare Treasures’. Are there plans for the British Library to publish more of her works.
I’ve just received the 100th book in the series of crime classics and it’d marked as 100:on the spine. It would be great if future releases were numbered in this way., is there a definitive list of releases by number anywhere that you know of.

Hello Dave. I don't know anything about Rare Treasures or whether their editions are authorised by the Lorac estate. I am confident that the British Library will publish more of Lorac in view of her great popularity. I believe they have also produced a checklist of Crime Classics, though I don't have a copy. I'll ask them about numbering.

A checklist from last September can be found here: https://issuu.com/bl_publishing/docs/10266_publishing_crime_classics_checklist_v6_sp.

However, I notice that it doesn't list 'Mr Bazalgette's Agent' as one of them, although I have a copy of it.

Sorry, that link doesn't work. Try this one, which has a selection of items from The British Library, including the checklist:

A very enjoyable book I had almost forgotten about. And such an atmospheric cover of your edition, Martin. I am envious! Interesting to reflect on what happens to fictional detectives when they go on holiday. Adam Dalgleish never had a good time, and poor Alan Grant almost ended up married. And never send Peter Wimsey out for a drive in a snowstorm. Fatal in so many ways.....someone should warn them!

Thanks, Liz - and absolutely!