The Crooked Shore in paperback and ebook 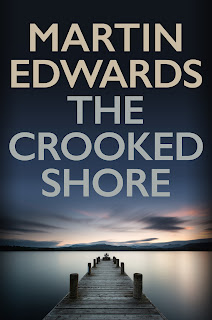 The elegant UK paperback edition of The Crooked Shore has just been published by Allison & Busby and I had a chance to celebrate this pleasing milestone last night, by giving my first library talk since before the pandemic changed the world. The venue was Barnton Library, in Northwich, a few yards from the house of one of my great friends from schooldays, Andrew Golding, whose home I visited many times, and who sadly died far too young.

I've been delighted by reaction to The Crooked Shore from reviewers and readers alike. This is my first Lake District Cold Case Mystery for six years, and just as The Dungeon House was a bit of a departure within the series, so - even more so - is this novel. Last night I was discussing the craft of crime writing and explaining why I believe that, even within a series which has been running for years, it's desirable and rewarding to keep trying new things. It keeps me fresh as a writer and I hope that readers find it adds to the enjoyment.

The danger with any series is that, even if it begins brilliantly, it can become a bit stale and formulaic. Ever since Conan Doyle tried to kill of Sherlock Holmes at the Reichenbach Falls, there have been cases of writers becoming bored and frustrated with series characters. I'm glad to say that has never happened to me and I guess part of the reason is that I write quite a varied mix of things, as well as trying to ring the changes while working on existing projects.

Because of a million other projects, I haven't got round to updating the reviews page on my website as regards The Crooked Shore, but here is some of that reaction I mentioned:

‘Detective Chief Inspector Hannah Scarlett's latest cold case involves the disappearance of a waitress from Bowness more than 20 years ago. The man charged with her murder was found not guilty but committed suicide thereafter. Now, on the anniversary of his death, his son has gone and done the same thing: walked out into Morecambe Bay and drowned himself. Meanwhile, the real killer is planning more midsummer mischief. This is the eighth of Martin Edwards's Lake District novels. As always a satisfying mystery is played out with lashings of local colour and history. Favourite line: "Through the trees peeped the dome of the eighteenth-century Round House, mocked by Wordsworth as a ‘tea canister in a shop window’”.’

'A splendidly imaginative plot will have you guessing and gasping until the very end.’

‘Well-drawn characters…Readers old and new will be well served by The Crooked Shore, which delivers twists and turns against an evocative backdrop of the Furness Peninsula…The Lakeland feel is heightened throughout with fun, fictionalised locales…Martin is something of a crime writer’s crime writer. Plaudits from Lee Child, Peter Robinson, and Ann Cleeves testify to the esteem he’s held in by his peers. The Crooked Shore is playful, creative, and solid storytelling from a writer in tight control of his material.

Will Smith, Cumbria Life Book of the Month

‘One of Martin’s strengths is that even when writing a series of books, he never seems content to write the same book twice, and there is a central idea in The Crooked Shore that I am not convinced that I’ve seen before. For a long time reading the book, I wasn’t convinced of what direction the plot was moving in…All in all, this is an engrossing read with some very clever ideas running through it…an excellent novel, one of the very best in the series to date, and easily one of the best police procedural (which is sort of is) that I’ve read in a very long time.’

Steve Barge, In Search of the Classic Mystery

‘There is a splendidly labyrinthine plot and a great cast of characters, many with secrets in their past….I raced through this book and enjoyed it enormously. There were points where I thought I knew where things were going, but I was wrong-footed at pretty much every turn and the end came as a complete surprise. All this and a visit to the Lake District. What more could you ask for? Except, of course, for the next instalment.’

Is this book to be titled "The Girl They All Forgot" in the U.S. edition? thanks for clarification, and looking forward to reading it under any name.

Thanks - and yes, you are absolutely right. It's due to appear in June and I shall be saying a bit more about it nearer the time.