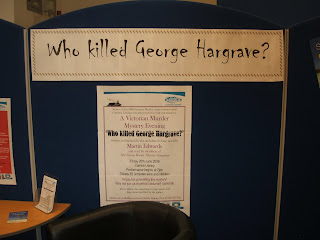 Friday evening saw me visiting Carlisle Library, to host another Victorian murder mystery evening when the question again was asked – 'Who Killed George Hargrave?' There was a large audience, which engaged admirably with the puzzle, and Paul Kimberley ultimately proved himself the best detective in Carlisle. The actors who played the suspects, from the Green Room company, were extremely good – the person who took the role of the culprit in particular put in a truly exceptional performance.

I’ve hosted more than twenty of these mystery events now, and typically, I find they attract much bigger audiences than conventional talks or panels with other writers. Why is this? I think it’s to do with the interactive element – people like the idea of being involved in solving a mystery. It’s not the prizes that matter to them, I’ve learned, as much as the sheer fun of taking part. One is reminded of those whodunits, very popular in the Golden Age, where writers such as Ellery Queen overtly set a ‘Challenge to the Reader’. But perhaps today more of us than in the past prefer to play the game in person rather than as readers.

One of the incidental pleasures of these events involves the people you meet. On Friday, a former client of mine showed up together with her partner – it was great to see her again. And the library staff were terrific – top marks for their period costume!

A special word of thanks to Helen Towers, the Reader Development Officer for Cumbria Libraries, who looked after me superbly. She has a large area to cover, and does a great deal of driving in her job, which must be hard work, but her enthusiasm is infectious – and her efficiency admirable.