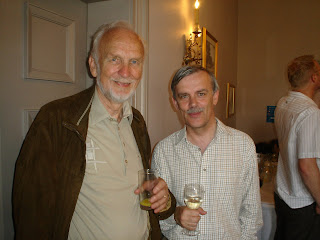 Once you have attended a few crime fiction conferences, you learn that it’s a good idea to pace yourself. It’s inevitable that some themes and interviews crop up regularly, and it’s a good idea to be selective. It also helps to take time out to recover from those late nights chatting in the bar….

But I really did enjoy a diverse range of events and activities during the Festival. These included a panel hosted by Barry Norman, and a session where Mark Lawson interviewed both Reginald Hill and John Banville, a brilliant and contrasting pair of writers. I had the pleasure of a long chat before and during lunch with Reg and, as ever, he was as witty and entertaining in person as he is in his books. (The photo of Reg and myself was kindly supplied by Ali Karim.)

There was also an interesting discussion of ‘nursery crimes’ led by Andrew Taylor which featured a classy line-up, including three writers I’ve never heard speak before, Suzette Hill, Christopher Fowler and Jasper Fforde, all of whom were very good indeed. The level of discussion was so high, I wished the hour could have stretched to two.

Wish I could have attended...the panels sound fascinating.

"Nursery crimes"--could you define it? All I can imagine is the type of crime against Lindbergh's child, etc.

What exactly are nursery crimes? asks the ignorant foreigner.

'Nursery crimes' - it's potentially a broad theme, and my next book idea may have a nursery rhyme element, so I had to attend this panel! But the discussion ranged much wider, including the influence of children's books (e.g. Andrew Taylor is a big Enid Blyton fan) and censorship (e.g. of racism in Tintin in the Congo.) I was expecting some discussion of the rhymes in Agatha Christie, but oddly this subject wasn't dealt with: a lack of time, no doubt.